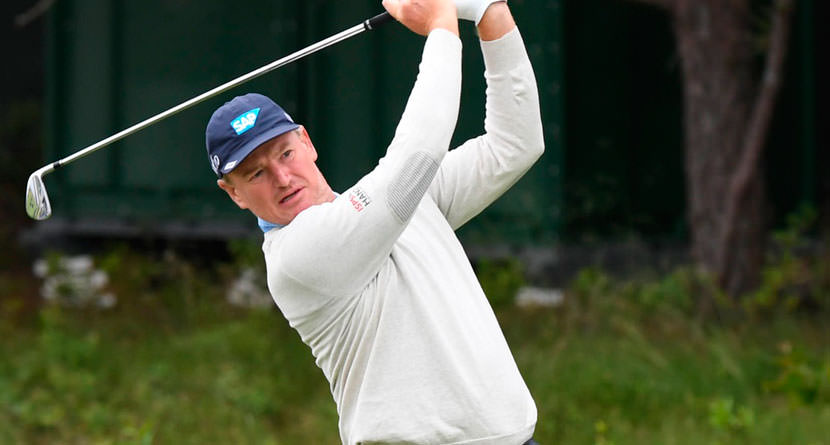 A persistent rumor on the PGA Tour that goes hand-in-hand with the swanky life of private jets is the juxtaposition of two millionaires duking it out just for laughs. That’s exactly what was confirmed this week on the No Laying Up podcast with Ernie Els.

The story, which had been whispered about in corners of the Tour, was brought to light on Barstool Sports’ Spittin Chicklets podcast when retired NHL player Mike Commodore joined the show and told a story about PGA Tour pro Steve Marino hitching a ride on Ernie Els’ private jet home from a tournament in Japan.

“Marino is sitting at a bar crushing some beers. Ernie Els walks in and sits down and they have a couple beers. Els is like, “What do you do for a living?” Els has no clue who this guy is. Marino is like, ‘Actually, I’m so many spots ahead of you on the money list.’ They both laugh. Ernie likes him.”


The conversation steers toward their respective schedules and they find out that both will be playing in a tournament in Japan towards the end of the year. Els offers Marino a lift back to Florida and Marino accepted. Three months later, Marino wasn’t sure if Els remembered his offer, but indeed, Els invited Marino aboard.

“They get on the plane — it’s just the two of them, they’re crushing beers, they take off, have some food, this and that. They’re having a blast. Marino’s like, ‘This is the greatest time of my life! I’m flying private. I’m crushing beers!’

“They’re standing kind of in the aisle or whatever and Ernie Els comes up to him and says something like, ‘Are you having a good time?’ then Els is like, ‘Now we fight!’ and straight up headbutts him, hard. Ernie starts throwing him around all over the place, and the co-pilot comes back screaming.”

Marino, covered in blood, has had enough and decides its time to get some sleep, but again Els lights the fire.

“At some point, he wakes up, and Ernie Els is towering over him and just strokes him,” Commodore said.

At that point, the co-pilot came back once again and separated the men and they went to their respective seats for the rest of the ride.

While all of that seems like a tall tale, Els was asked directly about the Marino story on the NLU podcast and he confirmed its truth as “a lovefest” and “no one got seriously injured.”

“It was just myself and Stevie coming from Japan to Palm Beach,” Els said. “We had a lot to drink. There was a lot to talk about, and we kind of hugged each other. It was a lovefest on the airplane. Nobody got seriously injured. It was all in good fun. It’s just what guys do and there’s a lot of testosterone running.”

Maybe flying private isn’t as glamorous as it seems.