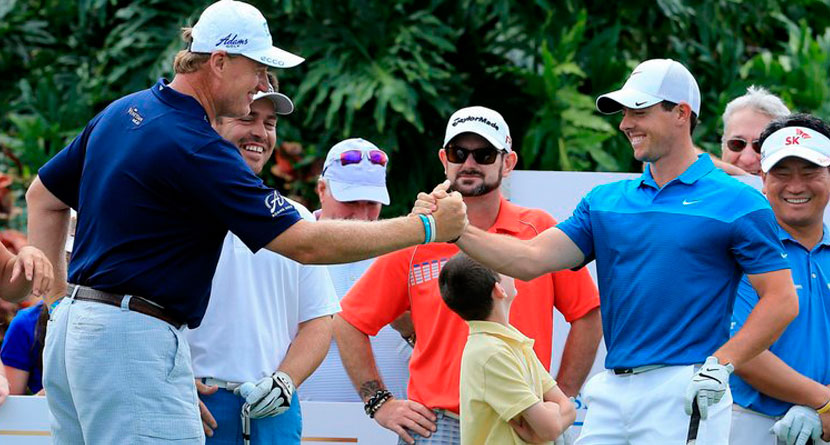 Rory McIlroy has at least one big-name player on his side when it comes to the four-time major championship’s criticism of the difficulty of the European Tour’s course setup.

Venting following a T26th finish at the Alfred Dunhill Links Championship, McIlroy told GolfDigest.com that he’s “sick of coming back over to the European Tour and shooting 15-under par and finishing 30th.”

“I don’t think the courses are set up hard enough,” McIlroy said. “There are no penalties for bad shots. It’s tough when you come back and it’s like that.

“I don’t feel like good golf is regarded as well as it could be. It happened in the Scottish Open at Renaissance. I shot 13-under and finished 30th (actually T-34) again. It’s not a good test. I think if the European Tour wants to put forth a really good product, the golf courses and setups need to be tougher.”

While McIlroy was managing the blowback from him comments, even backing off them slightly in an Instagram post, World Golf Hall of Famer Ernie Els came to his defense.

“Agree 100 percent with Rory,” Els wrote on Twitter. “When we toughened up (Wentworth Golf Club’s) West Course, 6-under won (the BMW PGA Championship). Had so much blow-back from players, we had to ease up and now 20-under wins. The European Tour’s flagship tournament and other top events need courses ‘major’ tough. Test the best!”

Agree 100 per cent with @McIlroyRory. When we @ErnieElsDesign toughened up West Course, 6-under won @BMWPGA. Had so much blow-back from players, we had to ease up & now 20-under wins. @EuropeanTour flagship tournament & other top events need courses ‘major’ tough. Test the best!

Having two of the European Tour’s most decorated players call out the circuit is certain to make some waves at Tour headquarters, but it will remain to be seen what, if anything, can be done about it in the short term.