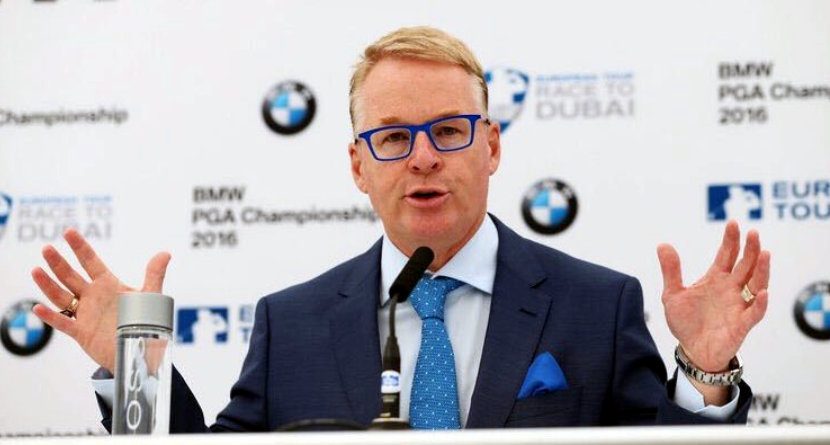 The European Tour is on a mission to push golf’s boundaries to places they’ve never never been. For years, professional golf tournaments have usually only been stroke play affairs. Since new CEO Kieth Pelley took the helm, it’s been anything but. First, they announced a change to the format of the this week’s ISPS HANDA World Super 6 Perth event introducing a 54-hole cut, with the remaining players playing 6-hole head to head matches until a winner is determined. Then last week they announced the formation new tournament called GolfSixes, which is innovative, to say the least.

According to a European Tour press release, the event will take place in London in early May. We’ll let them explain the details:

The inaugural GolfSixes event – featuring a prize fund of €1 million($1.25M USD)  – will make its debut on the European Tour schedule at the Centurion Club in St Albans, to the north west of London, on May 6-7, 2017.

The event will feature two-man teams from 16 different nations, each nation being represented by its leading ranked and available European Tour member from the 2017 Exemption Category List as at Monday March 13, who will be joined by a compatriot of his choosing from within European Tour Membership.

The first day’s play on Saturday May 6 will see the teams split into four groups of four – similar to the UEFA Champions League football group stages – before the top two teams from each group progress to the knockout stages – the quarter-finals, the semi-finals, a 3rd/4th place play-off match and the final – all of which will be contested on Sunday May 7.

In the group stages, three points will be given for winning a match with one point given for a draw while the matches themselves will be played in a greensomes match play format. (Greensomes format: Both players in each team hit tee shots on each hole. The best tee shot is selected and then the team alternate play of all subsequent shots required to complete the hole)

In addition to amphitheatre-style stands around the tees and greens, there will be music and pyrotechnics on the first tee and at various points around the course, with all players mic’d up to help bring fans closer to the action.

“We have said for some time that golf needs to modernize and introducing innovative new formats is a major part of achieving that aim, which is why I am delighted to announce the launch of GolfSixes today,” said CEO Keith Pelley.