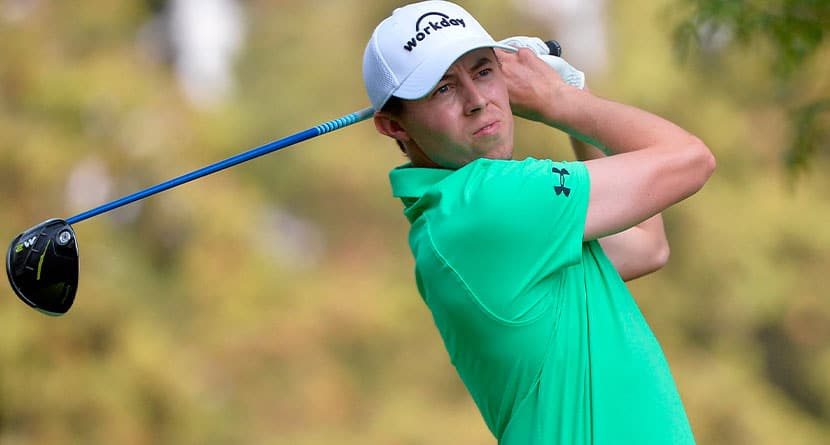 English Tour pro Matthew Fitzpatrick hits his drives roughly 300 yards on average, which is pretty impressive considering his size — 5’5″ and 155 lbs. What isn’t impressive, at least in his opinion, is what Bryson DeChambeau has been doing.

Fitzpatrick, who contended at last week’s BMW PGA Championship before a third-round 76 knocked him down the leaderboard, didn’t hold back after a second-round 65 tied him for the halfway lead when asked about the direction the game is headed as led by DeChambeau.

“Winged Foot, the fairways were tight as hell, and I drove it brilliantly, and I actually played pretty well, and I’m miles behind. He’s in the rough and miles up and he’s just hitting wedges everywhere. It just makes a bit of a mockery of it I think.

“I just looked at Shot Tracker yesterday, some of the places he hit it,” Fitzpatrick continued. “And he’s cutting corners — when he’s on, there’s no point, is there. There’s no point. It doesn’t matter if I play my best, he’s going to be 50 yards in front of me off the tee, and you know, the only thing I can compete with him is putting, and that’s just ridiculous.”

Half a world away, DeChambeau was bombing it once again, he too contending thanks in large part to his added distance — he was hitting his drives 362.9 yards on average — before finishing in a tie for eighth.

When asked about Fitzpatrick’s comments, DeChambeau said he took it as a compliment.

“I appreciate that comment,” he said. “It’s a compliment to me honestly. A year ago I wasn’t hitting in anywhere near as far as I am today. It took a lot of work, a lot of hours to work through the night to figure out a lot of this stuff. I would say it actually takes more skill to do what I’m doing, and albeit I may have — my fairway percentages are a little bit down, I’m still believe I’m hitting it straighter than what I was last year with the distances that I was hitting back then.

“I feel like I’ve started to go down a path that’s allowed me to have an advantage over everyone, and I think that is a skillset when you look at it. For me out there today, I was still able to hit a lot of fairways at 360 yards. That’s tough to do with drivers. So from my perspective, I think it takes a little bit more skill to do what I’m doing, and that’s why there are only a few people doing it out here.

“I would love to have a conversation with him about it and say, ‘Hey man, I would love to help out. Why couldn’t you do it, too?'” he continued. “You see Rory and DJ doing the same thing, too. They’re seeing that distinct advantage, and I feel like it’s great for the game of golf.

“I don’t think it takes less skill. I’m still putting it great; still wedging it mediocre, the same, maybe a little bit better. It shows out here that I’m still hitting fairways. Yeah, I do hit a couple errant shots like on 9 today, but I do hit a lot of fairways, I still hit great irons, and I make a lot putts. I still think there is a lot of the skill in that.”