Even A One-Sided Presidents Cup Can Be Entertaining 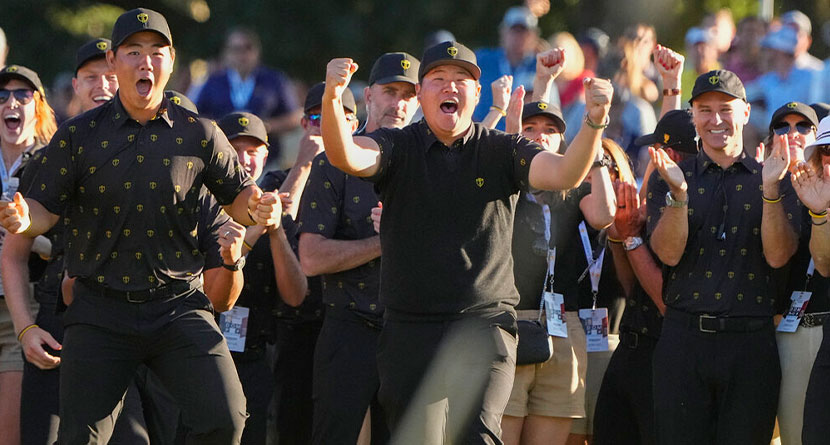 CHARLOTTE, N.C. (AP) — The final match of the morning session ended, and players in carts navigated their way through parts of 40,000 spectators at Quail Hollow. The grandstand around the first tee already was filling an hour before the next session at the Presidents Cup.

Music was blaring, the crowd was chanting. The scene brought one phrase to mind.

The slogan of LIV Golf comes naturally at the Presidents Cup, and it’s even louder at the Ryder Cup, where the heritage is deeper and the competition more intense.

Nothing brings out passion like team golf — once a year — even when the matches have been as one-sided as the Presidents Cup.

Peel away the history and other factors that make comparisons unreasonable, and the Presidents Cup and the Ryder Cup each have had the same number of events — five — that weren’t decided until the final hour, dating to 1995.

No one expected this Presidents Cup to be one of them. The Americans winning 17 1/2 to 12 1/2 was more about who they had than who the International team did not.

That didn’t stop unsolicited solutions at the start of the week on how to fix the Presidents Cup, and the chatter only increased after the Americans built an 8-2 lead after two sessions.

The short answer on what should be done? Nothing at worse, not much at best.

This was a stage for world-class golfers — 15 of the top 25 in the world were at Quail Hollow. On Friday, there were 67 birdies and three eagles from 10 players in five matches over 87 holes.

The entertainment was high. The enormous gallery was loud.

What can’t be changed is the volume, at least in America.

Think back to Ryder Cup at Medinah in 2012: The European fans were outnumbered, sure, but they had a voice. The International team has no fan base to travel, not with a team cobbled together from five continents outside Europe. Anytime a cheer resounded across Quail Hollow, it was obvious what it meant.

“It makes a difference,” said Paul Azinger, who has been part of a dozen cups as a player, captain or broadcaster. “Overall, it’s not going to change the outcome. But it’s nice to have that support. The Europeans fed off the energy at the crowd in Medinah. That whole game changed. You could hear the difference in the way they cheered.”

The PGA Tour, which exclusively runs the Presidents Cup except for letting the Internationals pick their own uniforms (along with a few other small details), could always consider a couple of changes.

Fewer matches make it tougher on the captains having to sit four players each session, and teams have been able to hide weaknesses. But it at least helps to keep it close.

Secondly, move to three days instead of four. The beauty of the Ryder Cup is the relentless action from the opening tee shot Friday morning and until the final putt Sunday. For the Presidents Cup, it has a more start-and-stop quality with one session Thursday, one on Friday and then a weekend sprint.

Of course, that would mean one less day of revenue, and that’s a big part of the Presidents Cup.

As it is, the Americans have a 12-1-1 lead in the series. Their only loss was at Royal Melbourne in 1998 when it ended 12 days before Christmas.

Davis Love III was asked ahead of the matches if he was worried about becoming the next Dennis Conner, the skipper in the 1983 America’s Cup that ended the longest winning streak in sport. The Presidents Cup isn’t that old, and Love wasn’t that worried.

Besides, is an International victory really going to change anything?

The Americans will always be measured by their Ryder Cup record. And it’s not as though they try any less despite winning the Presidents Cup nine times in a row.

A few players were so angry about losing two late matches Saturday — the American lead was only four points instead of six — that while Love’s message to them was to get to the points required to win the cup, it was clear that wasn’t good enough.

“These guys had a different number in mind,” he said with a chuckle.

The Presidents Cup has delivered compelling matches, like Royal Melbourne in 2019 and South Korea in 2015.

Ernie Els gave the International team a shield for its logo when he was captain in 2019. The PGA Tour helped this year by “de-Americanizing” the main Presidents Cup logo, replacing a semi-circle of stars with a solid arch over the gold cup.

It’s the little things that help the International create an identity.

The Internationals nearly won — probably should have won — in Melbourne and couldn’t wait for the rematch. Saudi-funded LIV Golf buying off at least four players didn’t help the cause, and yet they still put up a reasonable fight.

It will be loud. It will be entertaining. And that should be enough.