Everything Stacked In US Favor At Another Presidents Cup 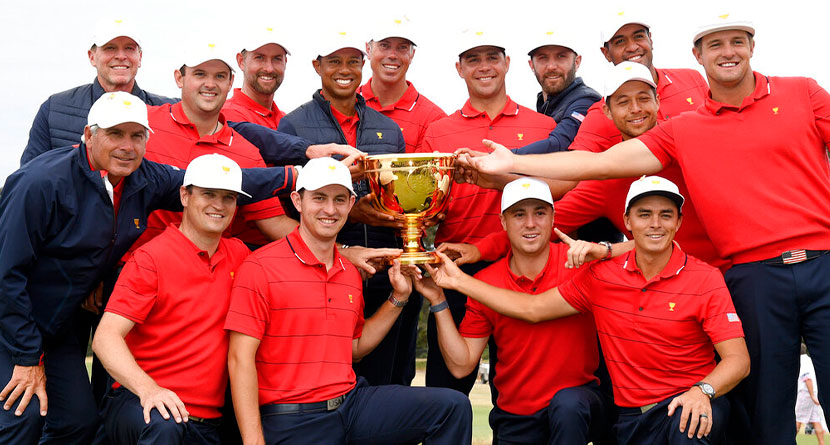 CHARLOTTE, N.C. (AP) — The last Presidents Cup was so close the International team walked away with renewed hope that it had enough game and enough fight to conquer the mighty Americans.

That now seems so long ago.

Sure, the COVID-19 pandemic pushed the Presidents Cup back a year. Far more disruptive was the Saudi-funded LIV Golf that depleted the experience from the International side.

“That’s something that we’ve been looking forward to for the last three years,” said British Open champion Cameron Smith, and then 20 days later he was officially announced as defecting to the rival league.

Joaquin Niemann of Chile and Marc Leishman of Australia also took the cash to sign with LIV Golf just two days before the 12-man International team was to be filled out. Louis Oosthuizen, so good in the Presidents Cup he had a winning record while never playing on a winning team, was among the first to go back in June.

U.S. captain Davis Love III was asked if he felt bad for Trevor Immelman, who was chosen International captain long before LIV was anything more than a Roman numeral.

“I feel bad for the game of golf right now that this is the story going in,” Love said. “I feel bad for all of us, really. But Trevor has a job to do, and that’s to take 12 guys in there ready to play, and he’s going to be focused on that.”

The 14th edition of the matches between Americans and an International team composed of players from outside Europe starts Thursday at Quail Hollow Club, and it looks to be as one-sided as the record suggests.

To give you a sense of just how much the U.S. team is favored in this week’s Presidents Cup, the -700 outright line is equivalent to money-line odds for a football team that’s a 16.5-point favorite.

The Americans have lost only once, in 1998 at Royal Melbourne in Australia, matches that ended 12 days before Christmas. There was a tie in South Africa and then eight consecutive U.S. celebrations.

The U.S. is not quite a year removed from giving Europe its worst beating ever in the Ryder Cup, 19-9 at Whistling Straits, with a young and hungry team.

The Americans were not immune to the defections — Dustin Johnson, Brooks Koepka and Bryson DeChambeau were on that Ryder Cup team — though there was no certainty they would have made this team. Johnson hasn’t won on U.S. soil since the November 2020 Masters, while the others are trying to return from injury.

And the state of American golf is such that replacements are easily found. All 12 players are among the top 25 in the world ranking.

The International team counters with only three players from the top 25 — former Masters champion Hideki Matsuyama, Sungjae Im and Tom Kim, the 20-year-old South Korean who wasn’t even a consideration until he won the Wyndham Championship six weeks ago.

Immelman brings eight Presidents Cup rookies to Quail Hollow. Only three players on his team have won tournaments this year. Only two — Matsuyama and Adam Scott — have won majors.

Love’s team has only three players who haven’t won this year. That includes two-time major champion Collin Morikawa and Cameron Young, the PGA Tour rookie who has been a runner-up five times and twice came within one shot of a chance to win a major.

Now think back to Melbourne in 2019, a Presidents Cup that was going the International team’s way until a U.S. rally on the final day and a 16-14 victory. Ernie Els was the captain who gave his side a new logo, a new identity and a fighting spirit.

Els said of his team when it was over, “If you look at their record and where these guys are at the moment, they are going places, I can tell you that.”

Going to a rival league for guaranteed riches was not what he had in mind.

The Americans have five Presidents Cup rookies, though two of them (Morikawa and Scottie Scheffler) played in the Ryder Cup, and two others (Sam Burns and Max Homa) have collected three PGA Tour victories in the last 12 months.

It’s one-sided on paper. It’s a one-sided history. If there is pressure on the Americans, it’s about not being the team that finally loses.

Immelman doesn’t hide the disappointment at not having Oosthuizen and Smith and Niemann and those who were looked upon as being big contributors.

What he has is 12 guys who wanted to be at Quail Hollow. Players who signed up for Saudi riches at LIV Golf knew they faced PGA Tour suspension, which meant not competing in the Presidents Cup.