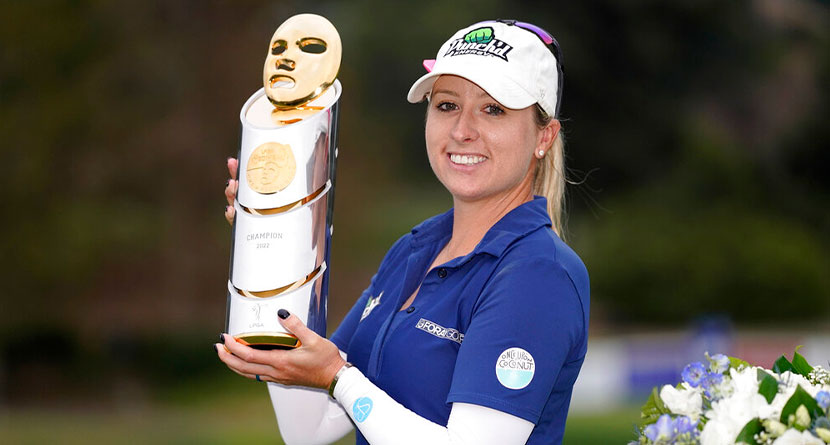 CAMARILLO, Calif. (AP) — Jodi Ewart Shadoff is finally an LPGA Tour winner in her 246th start, closing with a 1-under 71 in a nervy final round Sunday for a one-shot victory in the LPGA Mediheal Championship.

Ewart Shadoff went wire-to-wire at The Saticoy Club, and the final round felt more like a roller coaster. The 34-year-old from England started with a four-shot lead, and that was gone by the time she made the turn.

Paula Reto of South Africa had four birdies and took the lead when Ewart Shadoff took bogey on the par-3 ninth hole.

Ewart Shadoff regained a share of the lead with a birdie on No. 12, matched birdies with Reto on the par-5 14th and then held steady as the South African fell back.

Reto dropped shots on the next two holes, and Ewart Shadoff held it together on the closing holes. She wound up one shot ahead of former U.S. Women’s Open champion Yuka Saso, who closed with a 66.

When she tapped in for par, the celebration was a mixture of tears that friends and players sprayed on Ewart Shadoff.

A monumental moment for this champion.

She becomes the 10th player this year to win for the first time on the LPGA Tour, one short of the record set in 1995. None of the others had to wait this long.

Ewart Shadoff only knew that Sunday would be a new experience, and the test came quickly when Reto caught her in six holes — three birdies to Ewart Shadoff’s bogey on the third hole. But she never fell too far behind and relied on her putter, not typically the strongest part of Ewart Shadoff’s game.

“I learned that I could fight through adversity. I can play under the nerves, which it’s been kind of a problem for me in the past, is just trying to settle the nerves down and play through it,” she said. “I think I proved to myself that I can do it. I proved I can win. It’s been a long time, and like I could, I didn’t think I would ever be sat here honestly. Just really grateful.”

Atthaya Thitikul, the 19-year-old from Thailand, closed with a 68 and tied for eighth. It was her fourth consecutive top-10 finish on the LPGA Tour as she gets closer to reaching No. 1 in the women’s world ranking.

Jin Young Ko is No. 1 and has been home resting her ailing left wrist. Ko returns to competition in two weeks when the LPGA Tour goes to South Korea.