Ewart Shadoff Holds Her Ground And Expands Her Lead On LPGA 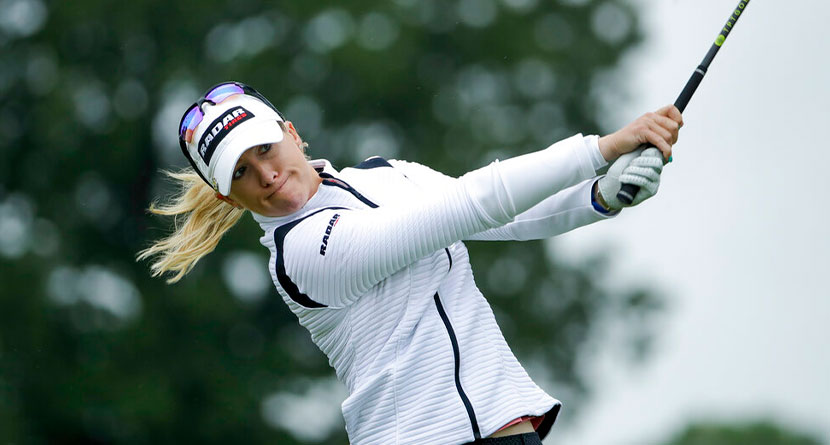 CAMARILLO, Calif. (AP) — Jodi Ewart Shadoff started out Friday as hot as she finished the day before at the LPGA Mediheal Championship. She finally hit a few bumps, but not before expanding her lead with a 3-under 69.

Ewart Shadoff opened with a 64 at The Saticoy Club by making four straight birdies over her last five holes. The 34-year-old from England added three birdies in her opening four holes and looked to be on her way.

She sprinkled in enough bogeys to slow her progress and still wound up with a four-shot lead over Paula Reto going into the weekend.

“Hit it really close on 4, so 3 under through four holes is a very quick start,” Ewart Shadoff said. “The wind started to pick up a little bit on the back nine, which is a little bit tricky, but, I played really well again today, and hopefully do the same at the weekend.”

She isn’t alone in pursuit of her first LPGA Tour title.

Xiyu Lin, the 26-year-old from China who goes by Janet, had another 69 and was part of the large group five shots behind.

Lin is coming off a a runner-up finish at The Ascendant LPGA in Texas last week, the third time this year she has finished second. This one had her wiping away tears. Another week on a tough course in California has her feeling more optimistic.

“I’ve been very motivated,” Lin said. “Last couple tournament, I mean, of course I wish I got the win, but I think I’m in a really good position. I’m not under any pressure. I just try to perform, be aggressive, learn from this.

“Right now I think all the good weeks gave me lots of confidence and I just know I can get it done,” she said. “Just a matter of time.”

Reto won her first title in Canada last month. Joining Lin in the group at 6-under 138 is Eun-Hee Ji, who has six LPGA title including a U.S. Women’s Open in 2009.

Atthaya Thitikul, the 19-year-old Thai who is closing in on No. 1 in the women’s world ranking, had a double bogey late in her round and had to settle for a 72. She was six shots back.

It all starts with Ewart Shadoff, who played college golf at New Mexico and has played on three Solheim Cup teams for Europe. All that’s missing is a victory, and Shadoff did well to make progress. She didn’t want to fall into the trap of trying to live up to a 64.

“Shooting such a low number yesterday, you can’t expect to go out there and do that, shoot another 8, 9 under again,” she said. “So I think I just played very similar today. Couple putts here and there just didn’t fall. Overall, I’m striking the ball well, hitting a lot of fairways, which I think is key out here.”

Danielle Kang, who went to college over the foothills at Pepperdine, was looking forward to playing in the afternoon before more fans. It didn’t work out that way inside the ropes when she had three bogeys in four holes. Kang salvaged her round with three straight birdies for a 73 that left her seven shots behind.