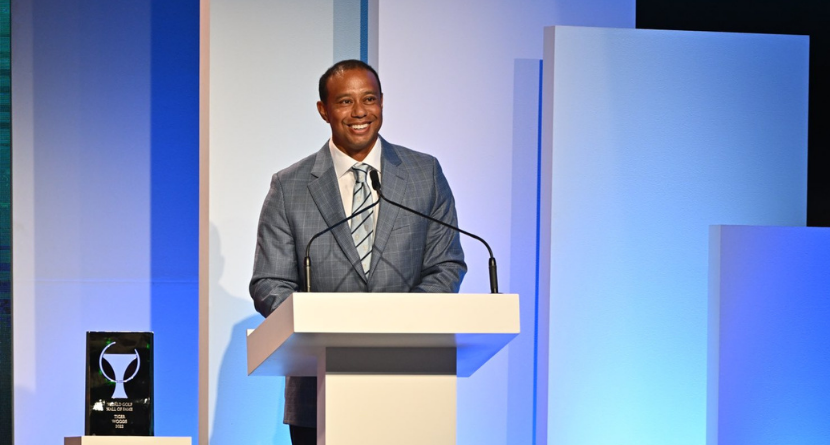 Tiger Woods teared up after his 14-year-old daughter, Sam, presented him. He teared up again when it was time to thank his parents for the sacrifices they made to nurture his talent.

But with those tears still fresh in his eyes, we saw the determination that drove the 46-year-old to dominate a sport that didn’t want him.

“I had this burning desire to be able to express myself in this game of golf,” Woods said Wednesday night at his World Golf Hall of Fame induction. “I made practicing so difficult, hurt so much, because I wanted to make sure that I was ready come game time. I hit thousands of balls, hands bleeding, aching, just so that I could play in a tournament.”

Woods spent the bulk of an impassioned 15-minute speech expressing his gratitude for friends and family, the team behind his staggering list of personal triumphs.

He talked about hustling grown-ups on practice greens and pursuing course records in places that wouldn’t allow him to change in their clubhouses.

Notably, though, there was nary a mention of a green jacket or a Claret jug; this was a night for “going retro,” Woods said. For honoring the parents who took out a second mortgage on their house just so he could play junior golf and for thanking those who stood by him during “the darkest of times.”

Sam, speaking with uncommon poise, set the tone with a funny and heartfelt introduction that let the world know the Woods children are definitely cut from the same cloth.

“We didn’t know if you’d come home with two legs or not,” Sam said. “Now, not only are you about to be inducted into the Hall of Fame, but you’re standing on your own two feet. This is why you deserve this, because you’re a fighter.

“You’ve defied the odds every time, being the first Black and Asian golfer to win a major, being able to win your fifth Masters after multiple back surgeries and being able to walk just a few months after your crash.”

The other inductees in the 2022 class were former PGA Tour commissioner Tim Finchem, LPGA legend Susie Maxwell Berning and posthumous honoree Marion Hollins. Hollins, who won the 1921 U.S. Women’s Amateur in 1921 and later became a course developer, was a trailblazer whose impact was felt far beyond women’s golf.