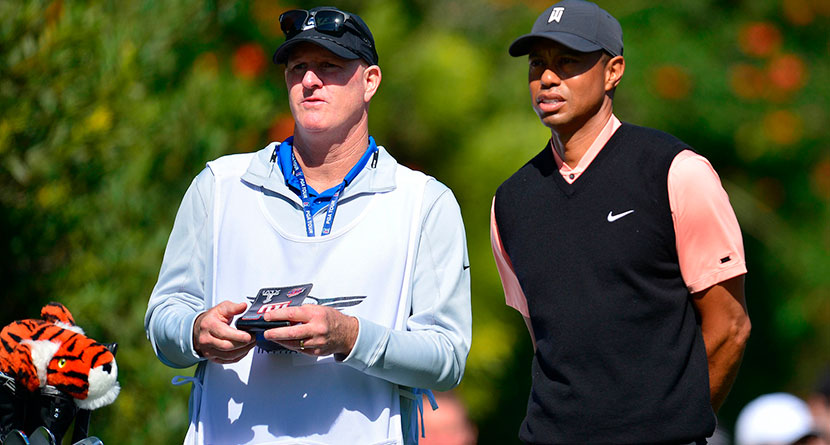 Tiger Woods and his caddie, Joe LaCava are being sued by a Florida man who alleges he is suffering from injuries stemming from an “intentional shove” by LaCava at the 2018 Valspar Championship, according to a report from the Associated Press.

Brian Borruso, via his lawyer, Josh Drechsel, alleges in a civil suit filed on Tuesday in Pinellas County that he was pushed by LaCava as he was trying to take a selfie of himself and Woods as they approached the 13th green at Innisbrook’s Copperhead Course, which caused him to stumble and fall resulting in injuries “either permanent or continuing.”

Drechsel said in the suit that it was being filed two years after the event in order “to get a better understanding of the injuries.” Woods was named in the suit because he employs LaCava.


“As a result of the culpable negligence of Defendant, Joseph LaCava, Plaintiff, Brian Borruso, suffered injury and damages including, but not limited to, bodily and mental injury, and resulting pain and suffering, disability, disfigurement, mental anguish, loss of capacity for the enjoyment of life, expenses of hospitalization, medical and nursing care and treatment, loss of ability to earn income, and aggravation of previously existing condition. The losses are either permanent or continuing,” the suit read.

A man trying to take a selfie in front of Tiger Woods at the 2018 Valspar is now suing the star and his caddie. https://t.co/a0Qa2iaJnk

According to the lawsuit, Borruso required a hospital visit to be treated for his injuries.

Given Woods’ stature in the game and the number of fans he draws when he plays, Drechsel made a public plea to anyone around the 13th green that day in 2018 who may have taken a video of the alleged confrontation. So far, two videos have been released on YouTube, neither of which appear to show to actual physical confrontation.

In one, a fan can be heard saying, “He just pushed him. He just shoved him right out of there.”

In another, LaCava can be seen walking towards fans with an arm extended saying, “You’ve got to back it up.”

An Associated Press text to Woods’ agent, Mark Steinberg, was left unanswered while LaCava said he had no comment.

Woods played in the Valspar Championship for the first time in 2018, resulting in record ticket sales. He went on to finish runner-up to Paul Casey.