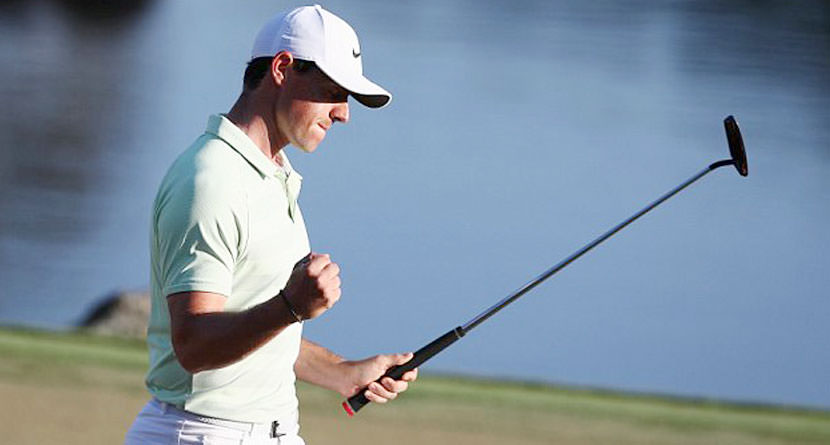 1st in Driving Distance
1st in Proximity to the Hole
1st in Scrambling
1st in Strokes Gained: Putting

McIlroy used his weekend off after the missed cut to practice at the Bear’s Club, one of the local West Palm Beach golf clubs at which PGA Tour players tend to congregate. While grinding out the missing piece of his game, eight-time PGA Tour winner and world-renowned putter Brad Faxon met McIlroy on the practice green and offered some advice.

“Freed up my head more than my stroke,” McIlroy said of his chat with Faxon, according to GolfChannel.com’s Rex Hoggard. “I sort of felt like (I was) maybe complicating things a bit and thinking a little bit too much about it and maybe a little bogged down by technical or mechanical thoughts.”

That freed up stroke led to more than 10 strokes gained on the field average on the greens, nearly 50 feet of made putts down the stretch over the final five holes and his first victory on American soil since the 2016 Tour Championship.

According to Golfweek.com’s Eamon Lynch, a planned one-hour session went closer to three hours and ended with a putting contest during which Faxon goaded McIlroy with a bit of a premonition.

Good nugget from @eamonlynch: After helping Rory to a 100-putt performance at Bay Hill, Brad Faxon was contacted by three other former major champs.

“When you win Bay Hill this week, you have to tell everyone I beat you in a putting contest,” Faxon said as he held a 4-2 lead in the match that consisted of 30-foot putts to various hole locations.

Naturally, McIlroy rolled in three of his next four 30-footers to best Faxon.

“Now I’m going to say I beat Brad Faxon in a putting contest after I win Bay Hill this week,” McIlroy responded, according to Lynch, “I didn’t know whether he let me win just to give me a confidence boost, but we’ve joked about that all week.”

With his putter seemingly hitting on all cylinders and a tweak to his driver shaft, McIlroy moved to 10/1 odds to win the Masters in two weeks, even with Dustin Johnson and Justin Thomas and trailing only Tiger Woods who is going off at 8/1.