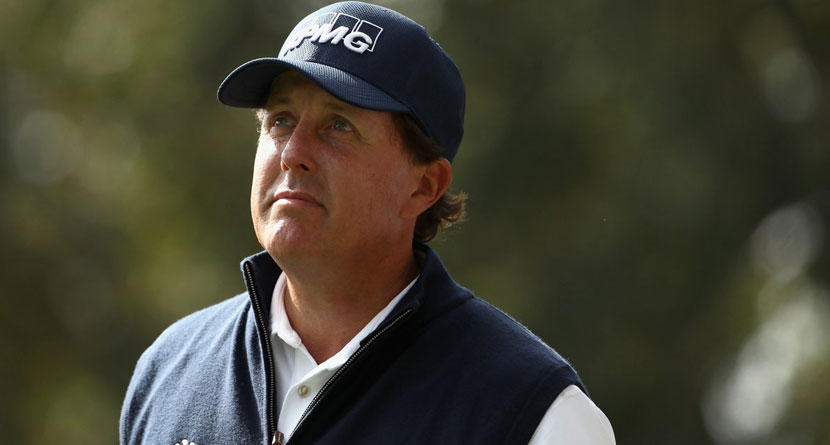 As more time moves between Phil Mickelson’s involvement in an insider trading case that saw the golfer repay more than $1 million in ill-gotten gains, more information concerning the investigation, the loophole by which Mickelson avoided criminal charges and the avenue by which information was decimated to the media continues to mount.

A Department of Justice report last week claimed that an FBI agent leaked information to two major news outlets during the onset of the investigation, which resulted in seven different articles appearing between May 30, 2014 and June 23, 2014 that publicly linked Mickelson to the investigation.

ESPN.com’s David Purdum had the report.


An FBI agent leaked confidential information to the Wall Street Journal and New York Times while investigating golfer Phil Mickelson and businessman and renowned sports bettor Billy Walters over allegations of insider trading, according to a letter filed by the Department of Justice on Friday in federal court.

In the filing, the government reveals that an agent “admitted that he was a significant source of confidential information leaked to reporters at the Wall Street Journal and the New York Times about the underlying investigation.”

“The agent further admitted that, prior to his Dec. 6 interview, he had hidden those communications with the press from both the USAO and others within the FBI,” the letter, submitted by U.S. Attorney Preet Bharara, states. “Based upon the agent’s admissions, which the USAO and the FBI regard with the utmost seriousness, it is now an incontrovertible fact that there were FBI leaks of confidential information to the press regarding this investigation.”

Phil Mickelson was not criminally charged for allegedly profiting off an insider stock tip to repay a debt owed to noted sports gambler Billy Walters. The disclosure of confidential information could be a violation of criminal procedure. The matter has been referred to the Office of Inspector General for the Department of Justice, and the FBI has reported the agent to its Office of Professional Responsibility, according to the letter.

According to the government, the articles included “sensitive and confidential details, including trades being examined, records being analyzed, the name of an individual approached by the FBI and the supposed targets of the investigation.”