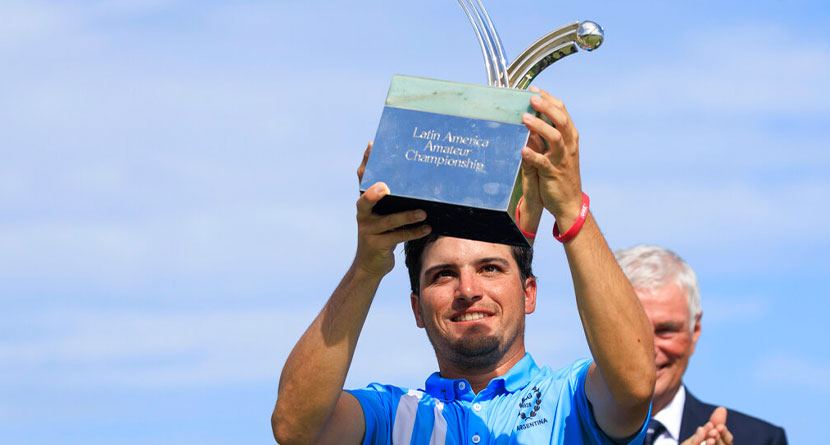 Mateo Fernandez de Oliveira made two straight birdies to turn away his last challenge and closed with a 5-under 67 on Sunday to win the Latin America Amateur Championship, earning a spot in three majors this year.

Fernandez de Oliveira, the second Argentine to win since the Latin America Amateur began in 2015, broke the 72-hole scoring record of Joaquin Niemann by eight shots. He finished at 23-under 265.

“I’m still very shocked. I think my life has changed,” Fernandez de Oliveira said. “I’m looking forward to a great year. I’m going to take advantage of the three opportunities that I’ve been given for winning this event. So I’m very happy and I just want to enjoy every second of it.”


The senior at Arkansas atoned for last year, when he missed a playoff by one shot at Casa de Campo in the Dominican Republic.

Fernandez de Oliveira was staked to a four-shot lead at the start of the final round at Grand Reserve. Luis Carrera of Mexico, who also closed with a 67, managed to get within two shots. But the Argentine birdied the 11th and 12th holes, and a steady diet of pars was enough for him.

In eight editions of @LAAC_golf, no one has ever gone lower.

After a wild week in Puerto Rico, @MateofdeoMateo set a tournament scoring record and earned himself an invitation to @themasters. pic.twitter.com/rhe0Hr6JzR

The victory sends him to the Masters in April and to Los Angeles Country Club in June for the U.S. Open and to Royal Liverpool for the British Open in July.

Royal Liverpool is where the late Roberto de Vicenzo became the first Argentine to win a major when he held off Jack Nicklaus to win the British Open in 1967.

Fernandez de Oliveira went to Royal Liverpool in 2016 and felt the Argentine pride.

“The minute I walked into the clubhouse, they asked me where I was from,” he said. “And I said, ‘Argentina’, and they told me, ‘OK, come with me.’ They took me to the lunch room where they have portraits and everything about when he won. I felt very proud.”

Carrera was awarded an exemption to the final stages of qualifying for the U.S. Open and British Open as the runner-up.

“I think the week has been fantastic,” Carrera said. “I am not sad at all. I just wish I could have won, but it was a great experience. I proved myself that I can play great golf, be up there, and win big tournaments. It is satisfying.”