Fiery Horschel Thrives In First Presidents Cup Match For US 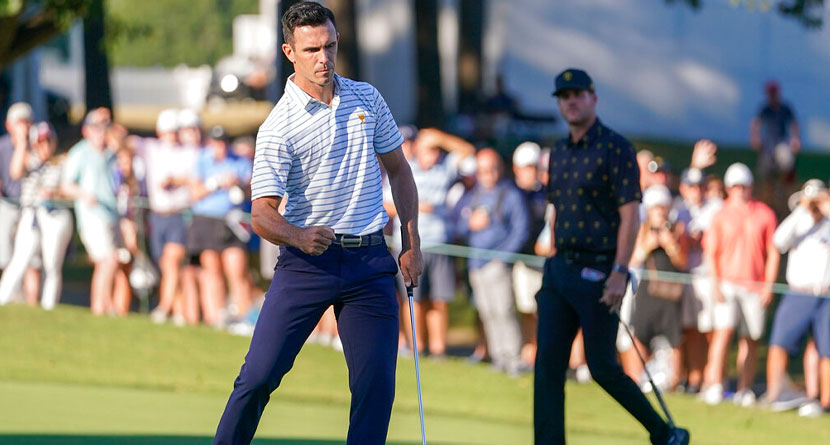 CHARLOTTE, N.C. (AP) — Billy Horschel raced over to Max Homa on the 18th green and chest-bumped his playing partner after Homa’s birdie putt gave the United States a 1-up victory over the International team at the Presidents Cup and a commanding 8-2 lead after the second day of play.

Then, as he walked away, Horschel privately pumped his fist in the air, his own little bit of satisfactory celebration.

The 35-year-old Horschel has always wanted to play for the U.S. in an international competition but has never had the opportunity. So Friday was a dream come true for the fiery 2014 FedEx Cup champion.

He’d never been so nervous before a match, and said he felt like throwing up for about three hours before hitting the practice range.

“I had to keep people in check because I’ve had (other golfers) telling me for 13 years I was made for this,” Horschel said with a wide grin. “And I’m like, guys, easy, easy. I know I am, but you guys are pumping me up really big and I don’t want to deflate the balloon too early.”

“I feel like I’m gonna puke my guts out”

Billy Horschel he was definitely nervous before his first Presidents Cup match.

Horschel earned a reputation as an intense competitor in a team format way back in 2007 when he got under then-budding star Rory McIlroy’s skin at the Walker Cup.

Horschel hit a great bunker shot in a foursome match against McIlroy, then got overly excited and chased after the ball screaming, “Go in! Go in!” Horschel’s team wound up winning the match, but he awoke a young, sleeping giant in McIlroy. In the singles match later in the week, McIlroy responded by letting out a loud scream directed at Horschel after making an eagle putt on the first hole — and went on win the match.

Horschel controlled his emotions for 15 holes on Friday at Quail Hollow, other than when his tee shot on No. 9 barely missed the fairway and hit a random sprinkler head and careened dead left into some nearby trees, prompting a few choice words on the tee box from the seven-time PGA Tour winner.

But he quickly composed himself and even cracked a smile walking down the fairway when a fan yelled to the hatless Horschel, “Good call on the no-hat look, Billy — you’re distractingly handsome!”

But as the match intensified and the International team fought back from a 2-hole deficit, Horschel erupted with a big fist pump after sinking a birdie putt on No. 16 to halve the hole and keep the fourball match even.

When Homa made birdie on 17 to go 1 up and then matched Taylor Pendrith’s birdie on 18, the emotions came out.

“It was really fun watching Billy,” Homa said. “To be able to walk those fairways with Billy, I know he’s a high motor guy, as they say. … Billy’s a gamer. He’s a guy you want to play with. He’s a competitor, and he’s clutch as can be. So I knew he was going to be in his environment.”

U.S. captain Davis Love III sat Horschel for Thursday’s foursomes, but couldn’t bear to do it again on Friday.

“I mean, you can imagine having conversations with Billy Horschel all week about, by the way, you’re not going to play on Thursday, and make him wait another day to play?” Love said. “Then watch the exuberance of him — he hung in there great today, and Max made a couple great putts at the end.”

For Horschel, his first time in this type of setting as a professional couldn’t have gone much better.

He just hopes there will be more to come in the future.

“It’s awesome to be part of this,” Horschel said. “It gives you a little more energy in a team format because you’re playing with other guys and it’s great to be around these guys. I love these events.”