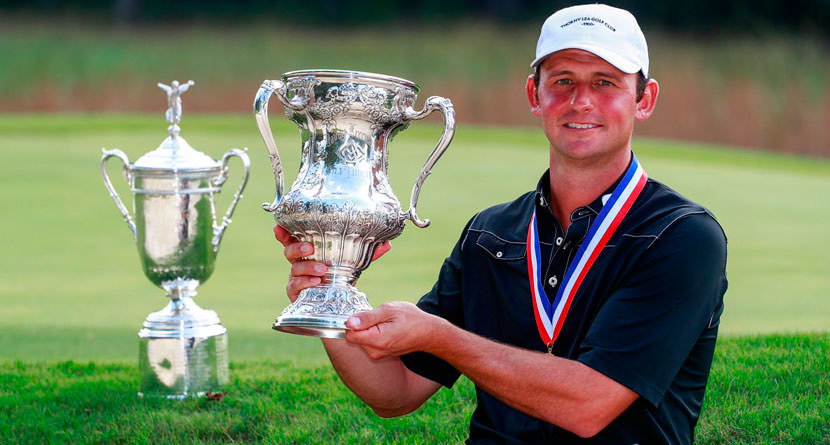 Matt Parziale punched a few of the most sought-after tickets in golf earlier this week when he won the U.S. Mid-Amateur, earning him a guaranteed spot in the 2018 U.S. Open at Shinnecock Hills and a likely invitation to the 2018 Masters.

A firefighter from Brockton, Massachusetts, Parziale defeated Josh Nichols, a wedding caterer from Kernersville, N.C in the Mid-Am final, concluding a week that saw both finalists play 36 holes of stroke play and advance through five rounds of match play before reaching the 36-hole match play final. Although every match didn’t reach its conclusion, both had to be prepared to play 162 holes — or more if matches were tied after 18 — over the course of a week.

Matt Parziale’s timing could not have been better. The 30-year-old firefighter defeated Josh Nichols, 8 and 6, in the 36-hole championship match of the U.S. Mid-Amateur Friday at Capital City Golf Club’s Crabapple Course in Atlanta.

That means Parziale is headed to Shinnecock Hills for the 2018 U.S. Open, with the USGA announcing last week that the men’s and women’s Mid-Amateur champions would earn a spot in the field.

“That was a great announcement,” Parziale said in a release. “At the time I didn’t know I would be the one going, but I’m very fortunate to have that opportunity now. I’m very excited for the upcoming year.

Now THIS is my kind of U.S. Mid-Am final. A firefighter and a wedding caterer battling it out for tee times at Augusta and Shinnecock. pic.twitter.com/DUdvlR4coJ

“I didn’t play that bad,” said Nichols, 26. “He played amazing. Even great golf couldn’t keep up.”

Parziale, who hadn’t made it past U.S. Open sectional qualifying in three prior attempts, birdied a par 5 to seal the match on the 30th hole after hitting the green with his 2-iron approach from 239 yards out. He came back from five down with eight holes to play to beat stroke-play medalist Bradford Tilley in Thursday’s quarterfinal match and topped Dan Sullivan, 5 and 4, in the semifinals.

The Southeastern University product had never won a U.S. Mid-Amateur match in three prior attempts and earned an exemption into the next two U.S. Amateurs with the win. Nichols earned a spot in next year’s U.S. Amateur at Pebble Beach.

Perhaps the craziest part of it all? Parziale had to be into work at 7 a.m. the day following his Mid-am breakthrough, as he told Golf.com’s Dylan Dethier.

Matt Parziale didn’t get much time to celebrate the biggest win of his golf career – he had to get back to work.

“We actually missed our first flight out from Atlanta, the traffic just got so bad. By the time I finally got home it was around 2 A.M.,” Parziale said. “And then I had to be in at 7.”

“Obviously, the more matches you win, the longer you’re there,” Parziale said. “I’m lucky to have a job where I can work in time to play in events and make the time back up later.”

The newest Mid-Am champion will have some serious scheduling to do this upcoming year; with the win, he earned himself a spot in the U.S. Open and U.S. Amateur, with an invitation to The Masters certain to follow.

“Oh, gosh, that’ll be a good problem to have, I think,” Parziale said when asked how he might work major championships in among his regular shifts. “None of that has sunk in, and everything is such a blur right now. I was trying to go through my phone, and everyone has just been so supportive, reaching out, following along, it’s really been incredible.”