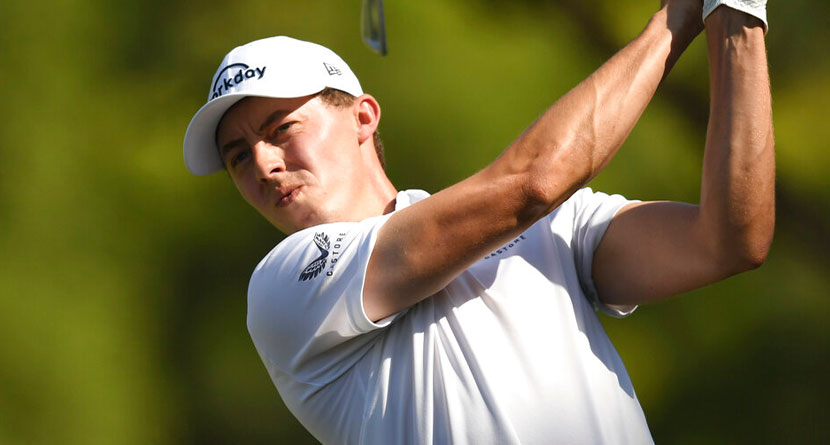 DUBAI, United Arab Emirates (AP) — Matt Fitzpatrick’s fast start helped him move out in front in the Race to Dubai as Rory McIlroy struggled in the first round of the season-ending DP World Tour Championship.

Fitzpatrick birdied his first five holes and finished with a bogey-free 7-under 65 on Thursday for his lowest round on the Earth Course, where he is a two-time winner.

The U.S. Open champion was tied for the lead with Tyrrell Hatton, who went on a run of four straight birdies from the 13th hole but finished with his lone bogey on the par-5 18th.

McIlroy leads the Race to Dubai standings as he bids to be the European tour’s leading player for the fourth time in his career, but needed a birdie on the 18th just to get under par with a 71 that tied him for 22nd. Ryan Fox, who is second in the points table to McIlroy, managed only a 73 to sit tied for 33rd.

Fitzpatrick would clinch a first Race to Dubai title with a third win at the World Tour Championship, provided McIlroy or Fox don’t finish the event in second. Even a second-place finish would be good enough for Fitzpatrick as long as McIlroy doesn’t finish lower than seventh.

Fitzpatrick said he was playing with “a real sore throat” but was laughing with his caddie after his early run of birdies.

“It was a nice start to the day,” the Englishman said. “The biggest thing I’m so pleased about is just hitting 17 greens. And the one I missed I was a complete idiot.”

McIlroy birdied four of his first eight holes but couldn’t get anything going on the back nine and gave away a cheap shot when he three-putted for his fourth bogey on the 16th.

“Certainly not what I had hoped for,” McIlroy said. “Just started to drive the ball a bit crooked on the back nine. . . . It was nice to birdie the last just to shoot under par. But obviously I’ve had three weeks off since the CJ Cup, so just sort of trying to knock the rust off a little bit.”

The top-ranked McIlroy is trying to win the FedExCup and Race to Dubai in the same year for the first time, having won each event on three occasions. His last Race to Dubai title came in 2015, having also won it in 2012 and 2014.

Four other players — Tommy Fleetwood, Viktor Hovland, Shane Lowry and Adrian Meronk — also have an outside chance of overhauling McIlroy in the standings.

Of those, Fleetwood had the best opening round with a 68.

Hatton looked set to take the sole lead after capping his late run of birdies with a 64-foot downhill putt on the 16th.

“It was hit and hope,” Hatton said of that shot. “Obviously holing a putt from that distance down a tier like that, you need a lot of luck. There was a few times today where I did get lucky, and that was obviously a nice break.”