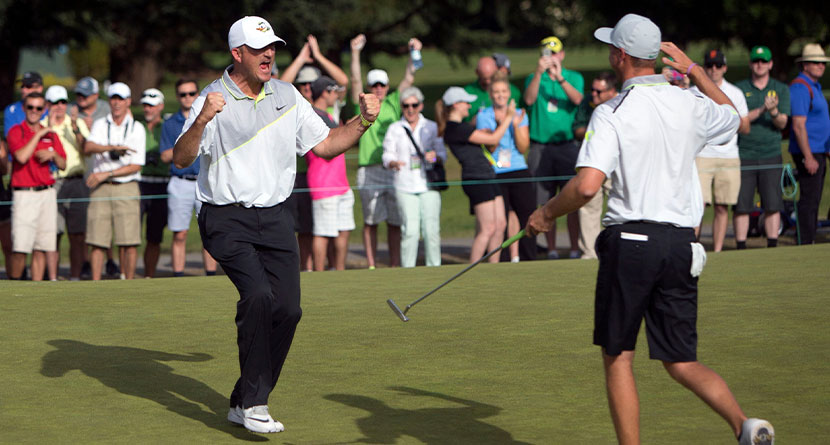 Casey Martin, the former PGA Tour pro and current Oregon Ducks men’s golf coach who is most famous for suing the PGA Tour — a case that reached the Supreme Court — for his right to use a cart during competition, had his right leg amputated above the knee on Oct. 15, Golf Digest reported.

Martin has dealt with a circulatory disorder called Klippel-Trenaunay-Weber Syndrome since birth, which makes walking difficult.

Despite the issues with his leg, Martin played collegiately at Stanford, winning a national championship in 1994 and overlapped a year with Tiger Woods. Martin won on the Korn Ferry Tour in 1998, but only had fleeting status on the PGA Tour. Martin did qualify for the U.S. Open twice, once during his prime in 1998 when he finished 23rd and later in 2012 where he missed the cut.

Martin told GolfChannel.com that he had lived in fear of breaking his right leg his entire life because the threat of amputation was imminent due to his poor circulation to the leg. In October 2019, that fear was realized when Martin took a wrong step while bringing in his garbage cans, breaking his tibia.

“I’ve lived with this fear all my life that if I break it, I’m probably going to lose it,” Martin said accident. “If it’s healing, then it’s a long process for me, probably longer than most. But if it’s not healing well, then we’re going to have to look at other options.”

For the past two years, Martin lived and coached the University of Oregon while wearing a cast on his right leg. Unfortunately, over the last two years, the leg failed to heal properly, which led him to the Mayo Clinic in Rochester, Minnesota last week.

College golf coach and former PGA Tour pro Casey Martin had his right leg amputated due to a circulatory disease he was born with: https://t.co/NOsXVeZblm pic.twitter.com/QfKOGazIGf

With Martin’s circulatory issues, doctors weren’t able to tell him or his family exactly how high they would have to cut the leg, the potential for excessive bone-bleeding and other complications from amputation are serious, even fatal, according to Golf Digest.

“The doctors prepared us for the worst-case scenario,” Casey’s older brother, Cameron told Digest. “But the report is (the doctors) feel it went well, as they were able to save as much of the bone above the knee as they had hoped. This should give him a good shot at a prosthesis that will be effective.”

Doctors amputated the leg above the knee, and the process of fitting Martin for a prosthesis will come in a few weeks’ time when the leg heals from the three-and-a-half-hour procedure.

“In many ways, I exceeded what my doctors told me as a kid,” Martin said earlier this month at the Colonial Collegiate in Fort Worth, Texas. “I always felt this would be my destiny. So while it’s weird to be here now, about to become seriously disfigured, it’s not unexpected.”

While the Ducks’ fall season winds down, another former PGA Tour player is taking the reigns of the program: Jeff Quinney.

Jeff Quinney’s journey back to Eugene included an epic victory in the 2000 U.S. Amateur.

“Although I’ve only been here a short while, I think Casey trusts me to continue what he’s established with the kids, that passion for enjoying the grind of getting better,” Quinney said. “I don’t think any of us can honestly know how much pain he’s been going through. But he’s never once complained or looked for sympathy. Hopefully, in the not-too-distant future, his day-to-day activities will become a little easier.”