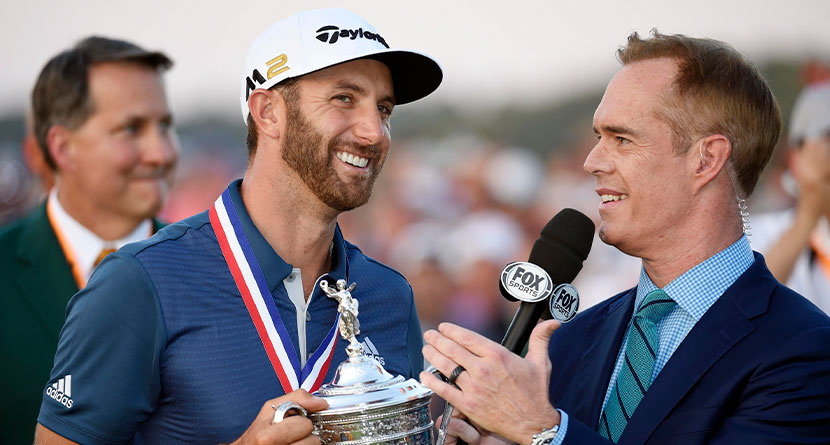 Surprising broadcasting news began to trickle out Sunday evening and was confirmed on Monday morning when the USGA announced that the rights to broadcast its championships had been transferred from Fox to NBCUniversal effective immediately.

“We are thrilled to acquire the remainder of FOX Sports’ USGA agreement, and will carry the designated USGA events, including the U.S. Open, through 2026,” Pete Bevacqua, president of NBC Sports Group, said. ”Adding these prestigious USGA events to our already incredibly deep golf business, led by our long-term PGA Tour partnership, as well as The Open Championship and the Ryder Cup, positions us as absolute leaders in the golf space.”

Sources: US Open returns to NBC this year for rest of Fox contract.https://t.co/MMC1VDqGnO

The Associated Press’ Doug Ferguson reported the news on Sunday evening, citing the coronavirus pandemic inducing a move of the U.S. Open to September as the first domino to fall. Fox was initially shopping this year’s marquee event as a one-time agreement as Fox’s airtime would be filled with college and professional football, according to The Wall Street Journal, but the negotiations grew from there.

“Partnering with NBCUniversal, including Golf Channel, gives us an unparalleled opportunity to connect and engage with the core golf audience more directly and routinely, and as a nonprofit, to continue to have a significant and lasting impact on the game,” Mike Davis, CEO of the USGA, said in the statement.

While Fox’s agreement with the USGA still had several years left to run, the network negotiated to unload the rest of its deal to NBC, which also owns the Golf Channel and has rights to the PGA Tour https://t.co/LQ6WQUslkZ via @WSJ

As for the financial aspect, Fox will be left holding the bag for their overzealous original bid, according to reports. The WSJ reports that NBCU will pay only “slightly more than the $37 million” it had paid previously, while the USGA’s statement made clear that “the financial remuneration for the USGA will remain the same for the duration of the agreement.”

That’s all to say, Fox will be paying somewhere in the neighborhood of $40-50 million per year not to broadcast the USGA events.

“Fox Sports has cherished its time as home to the USGA championships for the past six years. This is a relationship and partnership that has been second to none,” Eric Shanks, CEO and executive producer of FOX Sports, said. “Recent events calling for the shift of the U.S. Open created scheduling challenges that were difficult to overcome. While we are proud of the success we’ve built over these years, this is a win for golf fans everywhere, a win for the USGA and a win for FOX and NBC Sports.”

Fox’s coverage of the USGA Championships got off to a rocky start in 2015 as the network played musical chairs with its analysts and commentators before seemingly starting to hit its stride in recent years.

Genuinely bummed about the Fox/NBC US Open news. They were an innovator in the golf broadcast game. Had made huge strides year over year and inspired changes at the other networks.

The news broke as we were recording, reactions will be on the pod in a few hours.

Featuring wall-to-wall coverage of the U.S. Open, Fox attempted to break the mold of traditional golf coverage, and received adequate praise for doing so. However, their cavalier approach did not return the ratings that were expected, according to the WSJ.

Nantz, Hicks, Tirico all better at calling golf than me -but I would put our production up against anybody’s. Our innovation and drone shots and overall effort to try new things pushed golf coverage forward and for that I am most proud.Our producer Mark Loomis was a master tutor

The transfer of rights brings the USGA Championships back to NBC, their broadcast home from 1995 to 2014.