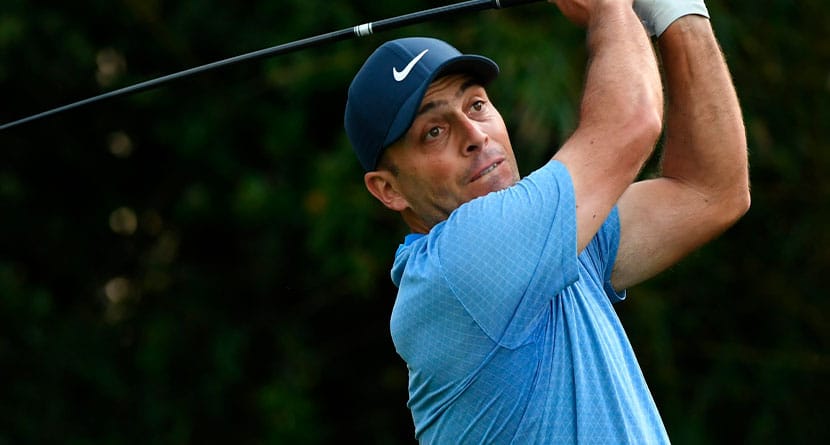 There were no amateurs in the field at the AT&T Pebble Beach Pro-Am this past week due to restrictions put in place as a result of the pandemic, but you could have been fooled that there was at least one mid-handicapper in the field if you turned on the broadcast at the beginning of Saturday’s third round.

Tee off of No. 1 at historic Pebble Beach Golf Links, 2018 Open Champion Francesco Molinari was 5-under par and in a tie for 15th place to begin the weekend. About 15 minutes later, he was 4-under par, but a simple opening bogey doesn’t come close to telling the full story.

With some less-than-ideal weather conditions, Molinari pulled a fairway wood for his opening tee shot and did something that fits in at every golf course around the world: he cold-topped his tee shot.

Stay dry out there today. 🌧

There are no breakfast balls on the PGA TOUR. pic.twitter.com/ARuLuiJfEr

Thanks to the Tour’s modern technology, we were able to glean more than a few data points from the topped tee shot. According to TourCast, Molinari’s tee shot had 136 MPH ball speed, apexed at 1 foot off the ground and traveled a total of 70 yards.

While the tee shot was very relatable to most amateurs, his up-and-down from the greenside bunker for bogey was not as much.

Shot 1: Relatable.
Saving bogey: Not so much. pic.twitter.com/9CSBnDktFF

Molinari didn’t have a great weekend, falling from the top-15 to solo 59th after rounds of 76-73, but he wasn’t sweating it too much. Shortly after finishing his round on Saturday, Molinari posted to social media some self-deprecating humor.

Anyone seen anything interesting today? 😂🥶🤯 pic.twitter.com/oGUAhHYlH7