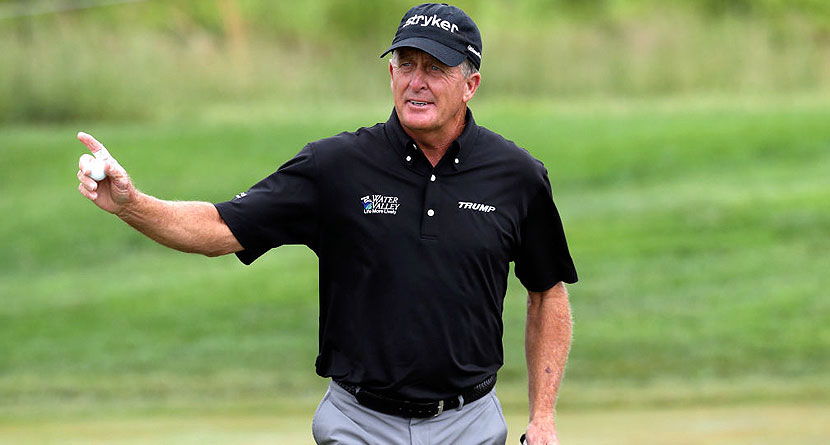 Fred Funk shot a 1-under par 71 to begin his Senior PGA Championship at Trump National Golf Club – Washington D.C. on Thursday, but his real battle was only getting started. The eight-time PGA Tour winner and nine-time PGA Tour Champions winner was the subject of an article in USA Today published on Wednesday evening by Christine Brennan, an award-winning writer and best-selling author.

The piece, titled “Senior PGA players are Trump’s kind of crowd” took Funk, along with fellow Senior Tour player Rocco Mediate, to task for choosing to adorn the name of the President of the United States on their clothing, a player/sponsor relationship between the pros and Donald Trump’s golf brand. Brennan called into question the players’ allegiances and then relayed Funk’s telling of a story about his lack of distance off of the tee.

Unfortunately, Funk wasn’t in the interview room for five minutes when he uttered a sexist remark. He was joking about how he gets new fairway metals every birthday to keep up with lengthening golf courses and said, “I feel like I should be on the ladies tour right now.”

He immediately caught himself with another attempt at humor: “I didn’t mean that in a derogatory sense, not at all. Just because Annika (Sorenstam) outdrove me, I’m a little bitter, but, no …”

But, no, indeed. It was fascinating that those blatantly sexist words came so easily to him. They tumbled off his tongue as if he had said them one hundred times before. Perhaps this was the first time, but it sure didn’t sound like it.

Immediately after the piece was published, Funk’s son, Taylor, a golfer at the University of Texas took to Twitter to voice his displeasure.

It’s truly embarrassing how much you can twist my fathers words in a press interview about golf just because he is sponsored by trump.

While Taylor was first to stand up for his father, the elder Funk penned a pointed rebuttal of his own in Friday’s Morning Read.

My experience with the media in my 30-year career generally has been fantastic, so when I saw the hatchet job by USA Today’s Christine Brennanon Thursday, I was more than dismayed. I was perplexed and angry.

I was portrayed by Brennan as sexist and clearly not in tune with her agenda.

Brennan then asked whether I supported Trump when he said unfavorable comments about women on the infamous “Access Hollywood” tape from 2005.

At the time, it was clear that the interview was not going to go well either way. I told Brennan that I wasn’t trying to defend it. I wasn’t asked to do so.

That was that, I thought.

Early on in discussing the PGA Tour and Champions Tour successes, I made the following statement, all in fun: “It seems like every birthday I get a new head cover. [Meaning I am a short hitter.] [I] feel like I should be on the ladies’ tour right now. But I didn’t mean that in a derogatory sense; not at all. Just because Annika [Sorenstam] outdrove me, I’m a little bitter, but, no, it’s, it’s a good golf course.”

My intention was to play up the 2005 Skins Game event with Annika Sorenstam. Anybody who knows me and has heard of that story will know that I have the utmost respect for Annika and the LPGA.

I would like to point out that if you were to ask anyone in the interview room what I meant, no one would ever depict me the way I was portrayed in Brennan’s report.

It was as if it occurred at two different places. It simply did not happen.

I don’t mind that I support Trump and she doesn’t; that doesn’t bother me at all. However, I am extremely bothered by the fact that Brennan has pushed others toward questioning my relationship with Annika and the LPGA. That really hurt. She created an image as if I’m a man who disrespects Annika and the LPGA.

I don’t know how she could even validate that. I’m livid about that.

If you were to call every woman on the LPGA who knows me and the story about Annika and the Skins Game, I guarantee that every single person would support me 100 percent. Brennan does not know the story, and she spun it to fit her own agenda.

So, I just don’t get it. I don’t understand why Brennan would come to this golf tournament with an agenda and get away with it. Her whole goal is to take down Trump and anyone who supports him. I don’t think I’ve ever read an article by her that is positive. Her writing is always slanted negatively and often attempts to take somebody down.