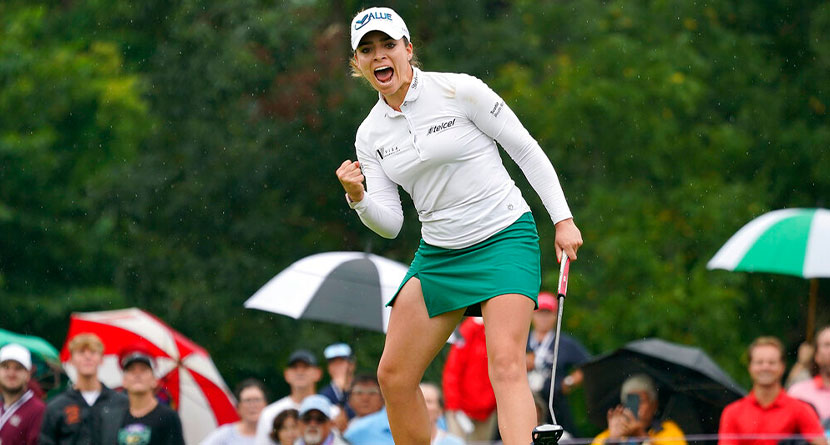 SYLVANIA, Ohio (AP) — Gaby Lopez rallied from four shots behind Sunday and closed with three straight birdies for a 8-under 63 and a one-shot victory in the Dana Open.

Lopez finished her big run with a 12-foot birdie putt on the par-5 18th at Highland Meadow, setting off a series of fist pumps, knowing it would keep her one shot ahead of Megan Khang.

All that was left for the 28-year-old Mexican was to see if anyone could catch her.

No one came particularly close, and Lopez had her third career LPGA Tour victory, and her first since the Tournament of Champions to start the 2020 season.

“I knew I had to make it because Megan was going to make hers,” Lopez said. “I practice exactly for this moment. We got the job done.”

“Sometimes the biggest win is not winning over the field, it's winning against yourself and getting out of the way."

After staying patient for 2 years, @GabyLopezGOLF adds another win to her resume as the LPGA heads to Cincinnati for the @QueenCityLPGA 🙌@TheAmyRogers piece ⬇️

Khang, who shot 29 on the front on a rain-softened course, closed with a 64.

Lucy Li, the 19-year-old Californian who started the final round with a one-shot lead, struggled to make birdies. Her hopes effectively ended when she hit into a fairway bunker on the 16th hole, played well short of the green and missed a 5-foot par putt.

Li birdied the 18th hole for a 70 and tied for fourth. She already has her LPGA Tour card for next season through the Epson Tour. Li tied for ninth in Canada last week to get into the Dana Open, and now she is eligible to play the LPGA event in Cincinnati next week.

“Yesterday I was a little nervous on the first couple of holes. Today didn’t really feel nervous at all, so that was definitely good,” Li said. “There is lots of lessons to be learned, but today I hit it good and I just couldn’t get a lot of the putts to fall honestly.”

The start of the final round had a feel of a battle of prodigies — Lexi Thompson qualified for the U.S. Women’s Open in 2007 when she was 12, and then Li broke her record in 2014 by qualifying at 11.

They were in the final group, along with Caroline Masson of Germany. In the end, none was really a factor.

Thompson has gone more than three years without winning and she didn’t make a birdie until the final hole. She closed with a 73 and tied for 16th, seven shots behind.

Li had one birdie and 14 pars as Lopez and Khang took over at Highland Meadow.

Masson was one shot behind Li at the start and was quickly forgotten when she opened with a double bogey and followed that with a bogey to fall four behind. In the end, Masson was the last one with a chance, though she would have needed an eagle-eagle finish on the two closing par 5s.

She birdied them both for a 68 to finish alone in third.

For Lopez, it was a matter of not trying to think too much about every shot, every result, and put her in a comfortable frame of mind on a wild day in which she had 10 players ahead of her at the start.

“This is going to sound crazy, but today felt more like a Friday round,” Lopez said. “Having that quiet is what we’re working on, and it has paid off.”

She was two shots behind and missed 6-foot birdie chances on the ninth and 11th and never lost focus on what she was trying to do.

“Doubts come into your mind,” Lopez said. “But my caddie said, ‘We jus keep doing what we’re doing. It’s definitely working, and we’re going to commit to that the last hole and see what happens.’

“If you keep it in the present, that’s when magic happens.”