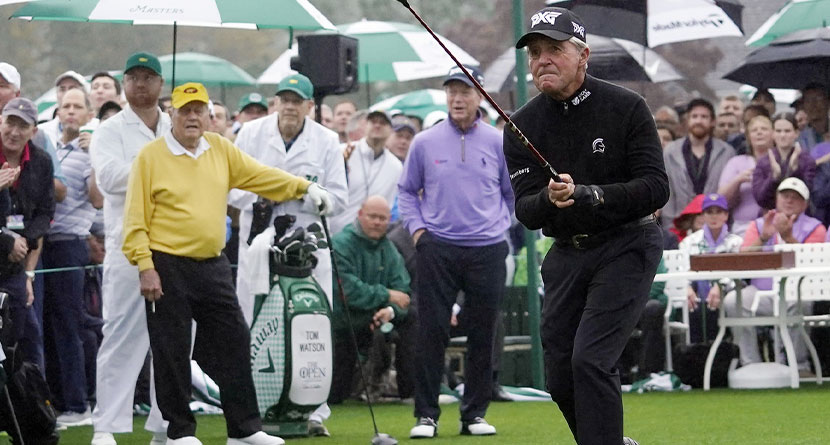 Jack Nicklaus, Gary Player, and for the first time, Tom Watson hit the opening tee shots of the tournament after a 30-minute weather delay and then proceeded to hold court in the Augusta National media center as play got underway.

Seeming at times more like a round-table discussion, the three dignitaries held court for just shy of 15 minutes piggybacking off one another and opining on everything from being on the first tee a few minutes earlier to their picks to win the tournament.

One moment stood out, however, when Phil Mickelson’s name was brought up. The three Masters champions were asked if they had spoken to Phil, and if they hadn’t, what advice they would offer should he request it.

Player spoke up to answer the question, ironically answering the question with a green jacket draped over a shirt that featured a Saudi Golf logo.

As @Coach_Mackay_ pointed out, Gary Player is rocking the Golf Saudi logo on his shirt today. pic.twitter.com/ychT7MV993

“I have a special thought on Phil Mickelson,” Player began. “I think we live in a time now when we are such a judgmental society, a litigious society, a critical society, where people get crucified. The greatest PR man on the golf tour in the last five or X amount of years has been Phil Mickelson. He has been the ideal man for a sponsor, for professional golf, for the public, the way he’s handled the public, with dignity and with love.

“And he should go on with his life. I think it’s pitiful — I actually made a statement on television. I said, If there’s nobody that hasn’t made a mistake, I’d like to invite anybody in the world to have lunch with me at Augusta, and if you haven’t made a mistake, I’ll have lunch with you, but I’ll have lunch on my own. It’s amazing. From the epitome of perfection, he’s down there being crucified. It’s not right. That’s my opinion.

“He said terrible things, but we all make mistakes.”