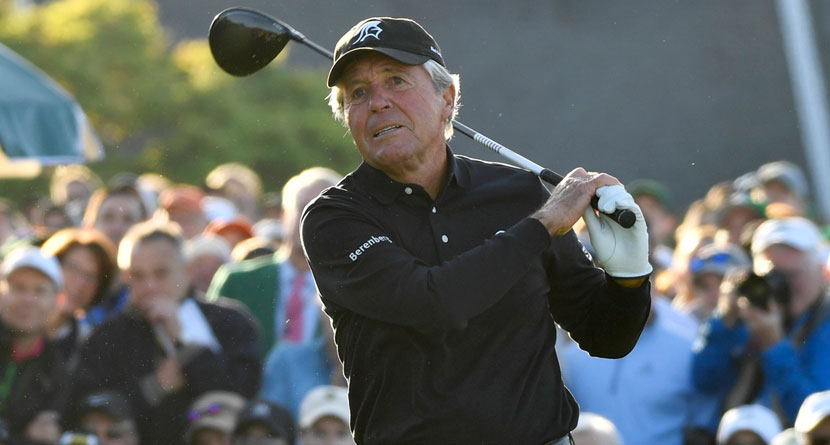 Player was charged with deposit account fraud/bad check last week after a $1,000 check for a rental house bounced due to insufficient funds.

Player had rented a house in Evans, Georgia, about two miles from Augusta National Golf Club, for April 3 and 4 of 2018, but when the check attempted to be cashed, it was returned for insufficient funds.

Player subsequently reached out to the homeowner’s lawyer saying that he would pay the $1,000, but the homeowner reported that he didn’t receive the money, resulting in the arrest.

Received the following from Gary Player’s team, regarding the arrest and fraud claims against his son Wayne during the 2018 Masters. Rest of story can be found here https://t.co/sjIY8f4SLQ pic.twitter.com/numItleHRo

When reached for comment by GolfDigest.com, Gary Player’s management company said the following, “Mr. Player is currently in South Africa and unaware of this unfortunate situation with his son Wayne. His position has always been that Wayne is an independent businessman that does not represent the Gary Player Group nor Mr. Player personally. We do not know the details surrounding this matter and until we find out exactly what transpired, cannot comment with any authority.”

Wayne Player, the third of Gary Player’s six children, previously played professionally, teeing it up in 17 PGA Tour events as well as the U.S. and British Opens.

Wayne is also involved in a civil suit, according to GolfDigest.com, for failing to deliver on a promotional package for the 2018 Masters.

The Player Amateur Tour, which Wayne served as the commissioner, says it cut ties with Player after the Masters, and that it has no ties to the Masters packages. In a previous tweet, Wayne promoted the event through a Player Tour web address https://t.co/QLDGybtTgT

Todd Feltz claimed he and his wife bought a $6,850 per-person package for the 2018 Masters, par-3 contest and a Gary Player meet-and-greet, but when Feltz and Player met to discuss the issues, Player became “angry and intentionally made physical contact with (Feltz) by headbutting him and knocking him to the ground,” according to reports.