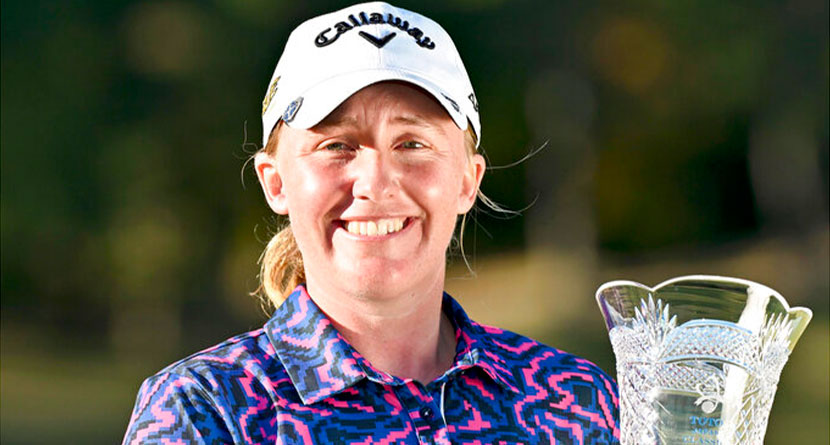 Gemma Dryburgh of Scotland is the latest example of how one good break can lead to places she never imagined.

She decided to go to Las Vegas as the first alternate for the Bank of Hope LPGA Match Play and received word at 9 p.m. on the eve of the first round that Anna Nordqvist had withdrawn because of illness.

Dryburgh, the No. 64 seed, advanced through her group by beating Gaby Lopez in a playoff, then beat Moriya Jutanugarn in 22 holes and eventually lost in the quarterfinals.

She did well enough to get into tournaments she wasn’t expecting, such as the Women’s British Open. Dryburgh thinks the result also helped her get into the Toto Japan Classic two weeks ago, which she won for her first LPGA Tour victory.

Along with the two-year exemption — she had never finished in the top 100 in four previous LPGA Tour seasons — she moved all the way up to No. 41 in the Race to CME Globe and earned a spot in the $7 million CME Group Tour Championship.

.@gemmadryburgh spent years wondering what it might be like to win on the LPGA Tour. Sunday, she came to know that feeling for the first time.

These moments reveal the kind of character we have out on Tour.

A piece by @TheAmyRogers ⬇️

“The start of that week I wasn’t even thinking I was going to get in,” Dryburgh said. “I wasn’t even going to maybe travel because it’s such a limited field. It’s kind of unlikely that someone would pull out. I’m so glad I did.

“Might not even have been in Japan if I had not gone to Vegas. Who knows?”

And now she’s part of a 60-player field in Naples, Florida, that pays $2 million to the winner. That’s a great opportunity for someone whose career earnings on the LPGA Tour are $768,540.

Sometimes, it doesn’t take much. Consider the plight of Graeme McDowell in 2009. He was the alternate for the Chevron World Challenge when host Tiger Woods had to withdraw as his personal life was imploding.

It was the first year the holiday event was awarded world ranking points. McDowell was runner-up, and it kept him high enough in the world ranking to get in the U.S. Open at Pebble Beach, which he won. That got him into the Ryder Cup, where he delivered the cup-clinching putt.

As McDowell said back then, “It’s kind of weird how small things can shape a year.”