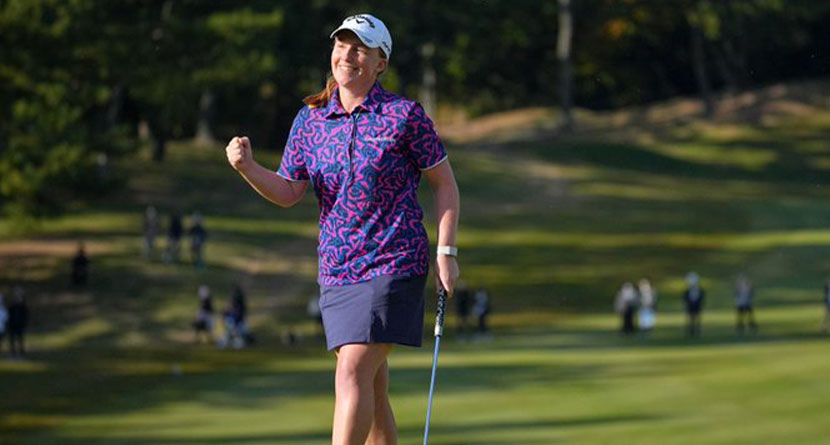 SHIGA, Japan (AP) — Gemma Dryburgh of Scotland won her first LPGA Tour title with a final-round 7-under 65 on Sunday to take the Toto Classic by four shots ahead of Japan’s Kana Nagai. Nagai also closed with a 65.

Linn Grant was a third, five shots off the pace after a 67.

Dryburgh, who also carded a 65 in the third round, finished 20-under 268 at the Seta Golf Club in western Japan.

Japanese Momoko Ueda, who led after the second and third rounds, finished eight shots behind after a 74. Ueda had won the event twice.

Dryburgh started the final round a shot behind Ueda and made the first of her seven birdies at No. 4 with a 20-foot putt. She added another at No. 7 and took the lead at the turn when Ueda bogeyed No. 9. At No. 11, Ueda made a double bogey while Dryburgh notched another birdie.

The 29-year-old Dryburgh finished with four birdies in her last six holes, including at the 18th, for a bogey-free day.

I’ve dreamt of this moment for a long time. I’m an @LPGA tour winner! Words can’t describe how much this means to me. Thanks to my team and my parents for everything they have done for me. Thank you Japan, you’ve stolen a piece of my heart forever ❤️🇯🇵 pic.twitter.com/cU6Yz1oXaC

Dryburgh had a premonition about winning this week, and it happened.

“I was in Korea last week with friends and I said to them: ‘I’ll mention you in my speech’,” she said. “Just as a joke. It’s overwhelming to be honest. This is a dream of mine for a long time.”

Dryburgh, who played golf at Tulane University in New Orleans — she’s still a serious Manchester United soccer fan — said she was relaxed despite the pressure.

“I was nervous. I’m not going to lie,” she said. “But I was incredibly calm to be honest and kind of focused on my breathing.”

Dryburgh is the first Scot to win on the LPGA tour since Catriona Matthew in 2011 at the Lorena Ochoa Invitational.

Atthaya Thitikul, the 19-year-old from Thailand who has climbed to No. 1 in the LPGA rankings, finished with a 67 and was 10 shots back of Dryburgh.

She was asked what she does next.

“There’s a lot of work to do,” she said. “I think I am still working and getting better, improving.”