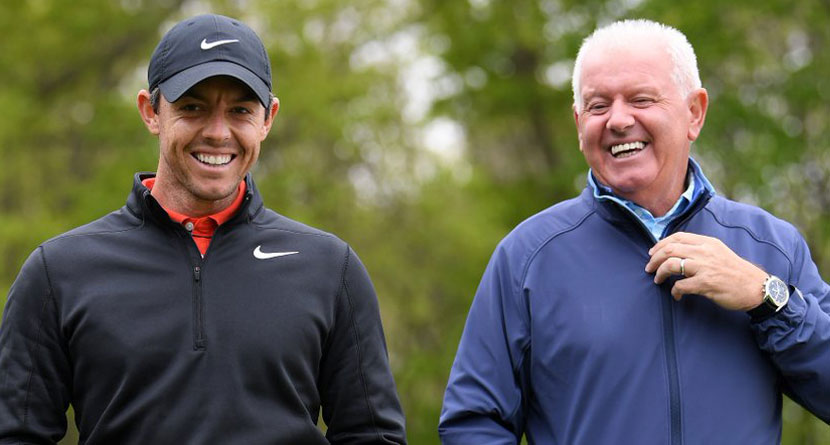 Rory McIlroy is on a crusade to retake the world’s top ranking from his newest rival, Brooks Koepka, but before he attempts to close that gap in this week’s Alfred Dunhill Links Championship, he had to get past his father, Gerry, during the pre-tournament practice rounds.

The European Tour’s answer for the PGA Tour’s AT&T Pebble Beach Pro-Am, the best golfers in the world are paired up with celebrities and other lucky amateurs to compete around the Old Course at St Andrews, Carnoustie and Kingsbarns. As he does yearly, Rory invited his father to play alongside him.

Similar to many competitive fathers and sons on the golf course, the McIlroys enjoyed spicing things up a bit with a healthy wager. By the looks of things captured by the European Tour’s social media team, Gerry got the best of his son on Tuesday, which had the four-time major champion asking for a stroke audit on Wednesday.

Not one to miss the opportunity to give his son some grief, the elder McIlroy showed that he still leads the family in strokes gained: trash talk when the pair teed it up on the Old Course on Wednesday.

How many shots would you need against Rory McIlroy? #DunhillLinks pic.twitter.com/cyVclR4tBw

“It was too much wasn’t it?” Gerry chided. “And to lose two days in a row would really knock your confidence.”

A general rule of thumb for Tour pros is that they need to be around a traveling +6 handicap to maintain a Tour card. But Gerry McIlroy is no slouch, himself. According to the GHIN website, he plays off of a 3.3 handicap out of Seminole Golf Club in Florida. On Wednesday, the strokes Gerry received appeared to be one short as the younger McIlroy stormed back from three down with four to play to win the match 1 up.

When you win the last four holes to beat your Dad 1UP ?#DuhillLinks pic.twitter.com/IFfig2bUZz

The duo will tee off in the tournament proper on Thursday playing Carnoustie first, Kingsbarns second and the Old Course in the third round on Saturday.