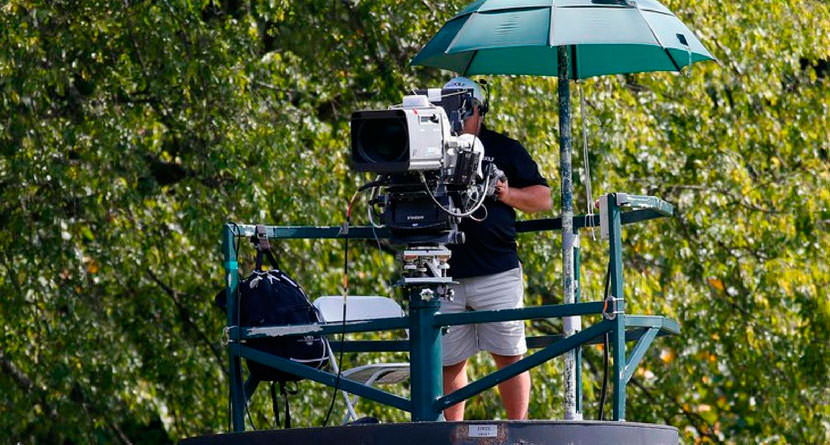 If you tuned into Sunday’s golf coverage in between or after the NFL Divisional Playoff games, you may have noticed that things seemed a little off. That’s because unionized video and audio workers walked out on Sunday amid a stall in contract negotiations.

Today’s Sony Open telecast could look a lot different due to a labor dispute: https://t.co/XiW1TKOUA6 pic.twitter.com/16ZsRCLMez

No Laying Up first reported the strike prior to Sunday morning’s broadcast of the Web.com Tour’s Bahamas Great Exuma Classic and proved to be the case throughout the day culminating with studio-led coverage of the Sony Open in Hawaii.

Sunday’s Golf Channel broadcasts will be “significantly impacted” by the fallout of a labor dispute between the network and its live tournament technicians union, according to several sources contacted by No Laying Up. The impact is already being seen on the Web.com Tour coverage and it remains to be seen how the Sony Open telecast will be affected.

Camera operators and technical crew belonging to the International Alliance of Theatrical Stage Employees (IATSE) union have been in negotiations with Golf Channel over compensation, as well as concerns with audio and utility issues, according to sources within Golf Channel and other people familiar with the situation.

After threatening a work stoppage earlier this week, the strike became official Sunday morning, leaving the 11 a.m. Web.com Tour broadcast in the Bahamas with a skeleton crew of non-union workers. After opening the disjointed telecast in the GC studio with Damon Hack and Paige Mackenzie talking over seemingly nonspecific highlights, the broadcast picked up coverage from on-site, obviously with a lack of cameras; coverage was seemingly limited to distant locked down shots and tower shots from the 13th and 14th holes.

The IATSE has not responded to an email request for comment. Golf Channel issued the following statement:

Golf Channel has been working on negotiating an agreement for nine months with a union that represents our live tournament technicians. Those efforts have not yet yielded a resolution, and we looking forward to reaching a mutually agreeable contract. However, some technicians have chosen to walk off the job today. We have contingency plans in place, and will continue to deliver coverage. Thank you to our viewers for the patience.

The PGA Tour issued the following message to players:

Here was the message communicated to the field at the Bahamas Great Exuma Classic pic.twitter.com/ySEJDfx3ZE

Golf Channel came on the air (for the Sony Open) by addressing the labor dispute, offering the following statement and confirming a scaled-back broadcast team:

We are focusing on the final groups and final holes tonight because some technicians walked out on the job earlier today. Similar events happened at other tournaments in the Bahamas and Orlando. Our teams at the Web.com Tour and the Diamond Resorts Invitational did a great job. Our team here is ready to do our best.

A source familiar with the dispute offered the document below, which outlines the union’s complaints and goals. The Sony coverage offered a few tower cameras and blimp coverage with commentary coming from the Golf Central team in the Orlando studio.

Haha, Jerry Foltz is running one of the tower cameras. What a time to be alive. pic.twitter.com/OsKhGI2TcA