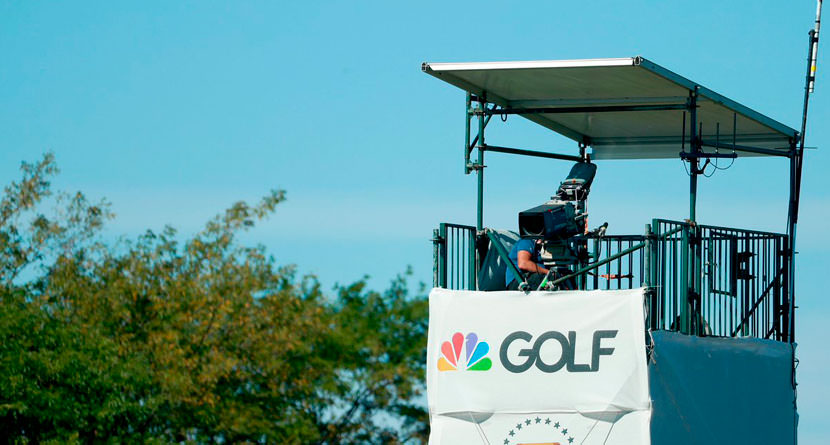 Fans of golf on television, rejoice. The International Alliance of Theatrical Stage Employees (IATSE), which includes Golf Channel audio, visual and technical workers, signed a contract the ended the 11-day strike that began prior to the final round of the Sony Open in Hawaii.

Walking out over stalled negotiations concerning wages and workday hours, among other things, the IATSE was resolute in their boycott until Golf Channel returned to the bargaining table with a better offer. That offer was placed in front of the IATSE late last week with the vote being ratified on Wednesday.

Golf Channel technicians strike has ended. Back to work Thursday. They get the increased wages and health care contributions, & Jerry Foltz doesn’t have to worry about ever manning a camera tower again.

Geoff Shackelford of GeoffShackelford.com had the release from the IATSE.

More than 300 national freelance broadcast workers at the Golf Channel ended their strike Wednesday afternoon by ratifying their union contract with the International Alliance of Theatrical Stage Employees (IATSE).

Broadcast workers in all crafts will receive wage increases, bringing them closer to industry standard rates, and increases in health care contributions from the employer. The Golf Channel also agreed to compensate workers who work long hours but don’t qualify for overtime when tournaments fall across two workweeks.

“This is a huge win for broadcast technicians working in the highly specialized world of golf programming,” said Sandra England, Department Director of Broadcast for the IATSE. “Freelance workers standing together like this, supporting each other, it’s never happened before. All three broadcast unions stood in solidarity to send a powerful message – that there is a line where workers will say ‘No’ and back it up, and that nobody can take us for granted.”

“This is the power of solidarity,” said IATSE International President Matthew D. Loeb. “Golf Channel technicians supported one another, and achieved something they could not have hoped for on their own. Everyone who works in sports broadcasting will benefit from this contract, because it raises the floor for all workers.”

Negotiated by the IATSE, the contract is the result an eleven-day strike that started after the Golf Channel ended nine months of negotiations, six months without a contract. Since the last contract expired on June 13, 2017, Golf Channel broadcast technicians have been working without a contract. Wages for technicians at Golf Channel, which is owned by Comcast- NBCUniversal, have been far below the standard wages paid by other sports broadcasters.

The 2-year contract, with health care contributions retroactive to the last contract’s expiration on June 13, 2017, was ratified in a three-day voting period that ended at 5pm Eastern January 24. All work conducted after January 24 will be under the full terms of the contract, including the newly negotiated wage and benefit contributions.