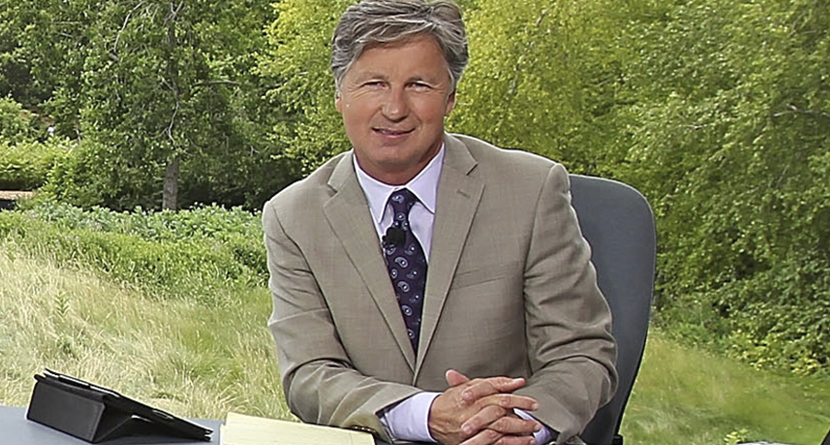 Brandel Chamblee has never known an opinion he didn’t like.

Golf Channel’s controversial resident analyst is never afraid to attack other pros and criticize, something he did as recently as earlier this month when he said that Rickie Fowler needed to be more arrogant.

Chamblee is apparently ready to put his money where his mouth is. The 55-year-old, who has not played professionally since 2003, is vying for a spot at the British Senior Open set for July 26-29 at the Old Course St. Andrews.

“When I’m playing and practicing a week or two at a time, my game gets pretty good. I have roughly three months to try to get my game in order. Every day I go out and try to swing like Ben Hogan, chip like Jose Maria Olazabal and putt like Bobby Locke or Horton Smith. I don’t, but I’m not afraid of failure,” Chamblee said to Golf Digest.

“I want to be as smooth as Rich Lerner or Mike Tirico, too, but I don’t know that I get there all the time,” Chamblee continued. “Big goals, they’re fun. If you fail, you pick yourself up, get after it [again] and narrow your focus. I’m 55. I’ve got five more years probably to do it. I’m probably not as banged up as most 55-year-old golfers. Physically, my body is in pretty good shape. I don’t hurt. I’ve still got a lot of flexibility, a decent amount of speed.”

Chamblee: I Could Fix Tiger’s Driving In 2 Minutes

Chamblee is best known for his strong opinions as an analyst on the Golf Channel. He gives hot takes and also is a lightning rod for discussion on the internet. Few remember that he was on the PGA Tour and once held the lead at The Masters.  The 55-year-old Chamblee was once ranked as high as 58th in the world and will enter a Senior British Open qualifier this summer. He may also try and qualify for the Champions Tour. He told Golf Digest that he isn’t afraid to fail at reviving his professional career.

“I get a chuckle out of people who try to denigrate my career,” Chamblee told Golf World. “I was an extraordinary golfer. I say that with all humility. There are 25 million who play this game, and I was 58th in the world. I was a decent tour player. I played at the highest level for the better part of 15 years. At times I got damn close to being really good.

“I don’t at all look back on my career with any regret. I gave it my all. I burned the candle on both ends, practicing sunup to sundown and thinking about it until I decided to do something else. I didn’t quit because I was playing bad or was hurt. I quit because of life matters, family matters and a goal of wanting to do something else in my life and see if I could be any good at it. That was it.”

Chamblee’s return will no doubt cause headlines with many of his detractors hoping for failure. One thing is certain, he is putting himself out there and isn’t afraid to take the heat.