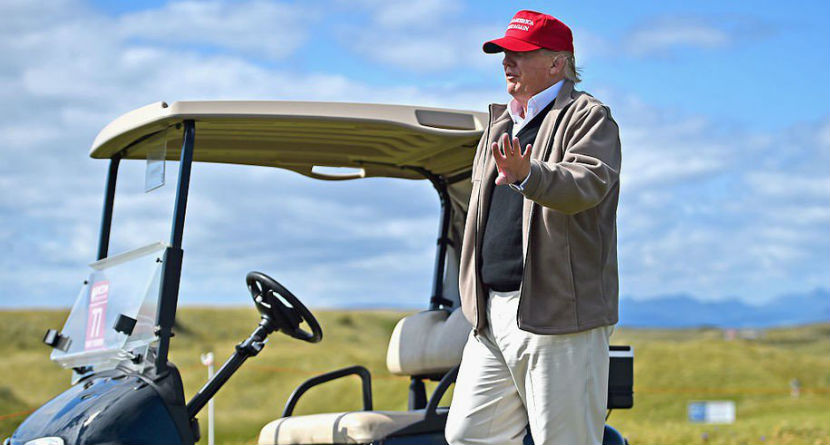 Golf has always had a special place in the White House. However, never before has it been thrust into the spotlight quite like it has since President Donald J. Trump has taken office. Not only does the Commander-in-Chief play the game, he happens to own some of the very courses which play host to major professional events, causing a few headaches among a few leaders of golf’s largest organizations.

Robert Gray from Sports Business Daily has the details:

“My tour is no different than this room or any other organization. I’ve got players who practice at Trump’s facilities and are personal friends with him and voted for him, and others who feel just the opposite,” said LPGA Commissioner Michael Whan, adding that he is bracing for disruption at the U.S. Women’s Open this July at Trump National Golf Club in Bedminster, N.J. “I know people are going to try to make this more than a golf tournament,” he said. “But I won’t let my political views or somebody else’s get in the way. The best female golfers in the world don’t always get the same opportunities as in other sports or that male golfers get. I won’t let some movement or moment get in the way of those opportunities.”

The Senior PGA Championship is teeing it up at Trump National Golf Club in DC next month, and the ’22 PGA Championship will also be held at Trump Bedminster. PGA of America CEO Pete Bevacqua said, “The process has been difficult for us. [President Trump] and the (Trump) organization have been huge proponents of the game for several decades. … We all have personal relationships with Donald Trump the person. I’ve played with him a lot. The last time I played with him was in late December. Whoever the president is, it’s good to have the president as a fan of the game and a proponent. Whether it’s President Trump, Obama, Clinton, or either of the Bushes.”

USGA Exec Dir & CEO Mike Davis added, “The USGA is in the business of golf, supporting golf, governing golf, and never wanted to get into politics. That’s easier said than done. … (President Trump) has been very supportive to date, but we just don’t want to get caught up in it. It’s a no-win situation and I think we have our work cut out for us this summer (at the U.S. Women’s Open).”

Whichever way the powers that be decide to go, they must tread lightly. Politics is a slippery slope.