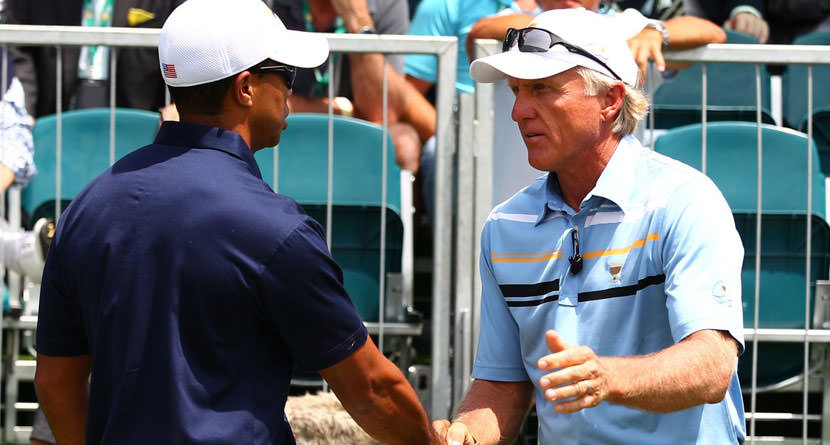 While the rest of the golf world has seemingly annointed Tiger Woods’ latest return to competitive golf a rousing success, former World No. 1 Greg Norman provided a bit of skepticism to the hype machine, which has been running on high since the Hero World Challenge.

“When you start getting up in the 156-man field and the golf courses are a little bit more difficult than Albany, a lot more rough out there …” https://t.co/9VL7WUKSKy

On hand as the tournament host at the PGA Tour’s two-person team event at Tiburón Golf Club this week, Norman raised some of his own concerns in his pre-tournament press conference.

Speaking at his QBE Shootout this week in Naples, Fla., the Shark asserted everyone should take a collective breath regarding Woods’ latest return. “Look, he’s a name. He’s moved the needle for quite a long time in the game of golf,” Norman, 62, said. “Everybody was wondering, you know, the speculation of him saying, ‘I may never play golf again,’ and then all of a sudden he says he’s hitting the ball 330 yards. Big difference from there to there, right?

“I hope he manages his expectations more than everybody else’s expectations being [that] he’s going to come back and be Tiger of past. I think he still has a little bit of time on his side, but not a whole lot.”

Certainly Woods’ startling admission at Liberty National that he wasn’t sure about his future has been discussed ad nauseam. It’s also worth mentioning that Tiger’s return at the 2016 Hero inspired its share of optimism after he led the field that year in birdies. Woods ended up playing just three more competitive rounds—a missed cut at the Farmers Insurance Open and a WD at the Dubai Desert Classic—before opting for a fourth back surgery in April, and hasn’t played an official event since.

Yet, his latest operation seems to be bearing fruit. Woods’ swing, along with his stride, were unencumbered, and he said he’s pain-free for the first time in years. Though he finished ninth out of the 18-man Hero field, he beat the likes of Dustin Johnson, Justin Thomas and Brooks Koepka. For once, harboring a positive outlook seems justified.

Still, Norman—who’s battled his share of injuries and setbacks in his career—questions if Woods and his body will hold up over the long haul.

“You just hope it continues on for him, because a lot of the stuff he’s done has been self-inflicted,” Norman said. “A lot of the stuff that he’s going through now is more, you know, the wear and tear of the body hitting a lot of golf balls.

“Being a power player, your body breaks down and that’s going to continue to be there because he just got ready to play one event, which was an 18-man field, right? When you start getting up in the 156-man field and the golf courses are a little bit more difficult than Albany, a lot more rough out there, and he’s got to manage his expectations. Instead of trying to power a 7-iron out of the rough 220 yards, your body may … you do that a few times, you never know what’s going to happen after that.”