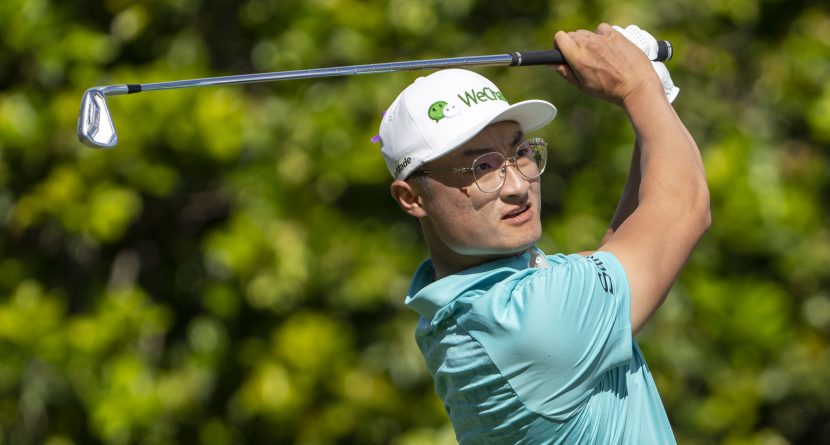 Conquering your golf demons feels good. It’s cause for letting your emotions hang loose and, yes, unloading some colorful language. If you don’t spike the football once in a while, what’s the point?

In that spirit, we give you Haotong Li, winner of the DP World Tour’s BMW International Open and the new standard-bearer for how to celebrate a victory and describe it to a live television audience.

On the first hole of a sudden-death playoff with Thomas Pieters on Sunday, Li — a 26-year-old from China who’s been forthright about his rocky relationship with his profession amid a four-year winless drought — packed enough drama for a golf lifetime into a three-shot sequence.

Haotong Li showing how much it means to win 🏆#BMWInternationalOpen pic.twitter.com/3MZPCnoTtn

First, Li’s second shot narrowly avoided the water hazard guarding the green on the 568-yard, par-5 18th hole. Then he thinned his chip, running it more than 40 feet beyond the pin. Finally, Li buried the birdie putt and unleashed a cathartic fist pump that served as a precursor to the eruption that was bubbling up inside of him.

When Pieters’ birdie effort slid by, Li was overcome with emotion. With the tears flowing, he bear-hugged his caddie and dropped to his knees, pressing his forehead into the putting surface as his shoulders heaved up and down.

It was raw. It was real. It was…well, it’s best to let Li finish that thought.

The win is Li’s third on the DP World Tour and first since he bested Rory McIlroy in the 2018 Dubai Desert Classic.

As recently as 10 months ago, before he aligned with his current caddie, Li was seriously considering a break from the sport he loved.

On Sunday, he found out what it feels like to get that love paid back.

“I don’t have the words to describe how I feel right now,” Li said. “When I hit that chip, I thought I had given away another chance. I can’t believe it has happened. Ten months ago, I had decided to literally quit golf. Then somehow, where I am now … it is golf and hard to describe.

“I have no idea how I won this playoff. It was an up-and-down battle. I hit a lot of good putts today, especially on the back nine. I already knew it was going to be super tough. I was just telling myself to hang in there. Win or lose I just wanted to play my best. And luckily, I did.”