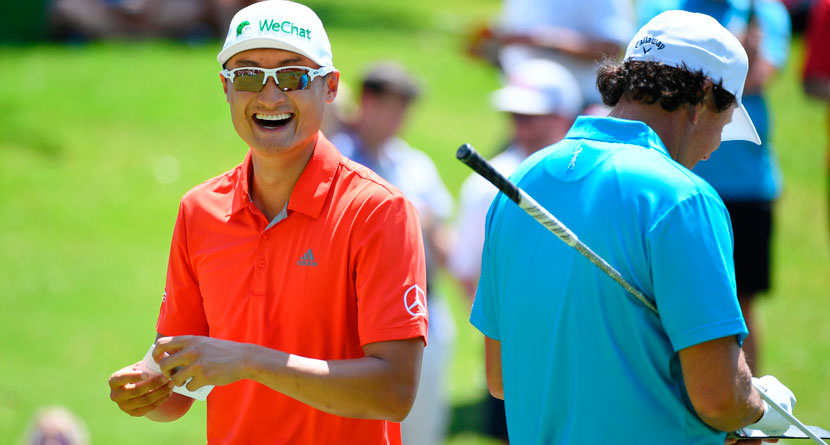 Phil Mickelson’s social media never stops even when he’s halfway around the world.

Between playing in last week’s CJ Cup in South Korea and next week’s HSBC-Champions in Shanghai, China, Mickelson participated in grow the game event in Macau alongside Chinese superstar Haotong Li.

Naturally, when Mickelson and a candle are nearby a “Phireside with Phil” episode is not far behind, and in Li’s inaugural appearance, the 24-year-old shared a memorable and hilarious story about an interview he gave following a strong finish in an event that resulted in him making more money than he did for winning the Volvo China Open.

After shutting down Mickelson for once again telling him about a course he designed in China, Li got into his story.

“The interviewer says, ‘you won that much money and a lot of world ranking points, so what are you going to do with them?'” Li explained. “And I said, ‘I may buy some gifts.’ But for some reason (my accent made) the voice change and made a huge mistake. (Buy some gifts) becomes ‘buy some girls.'”

Found a candle so we shot a #PhiresideWithPhil in China with @haotong_li. Athletes often claim to be misquoted by the media. This is a pretty big misquote ? pic.twitter.com/T3xc3qPp2M

A clip of the interview in question was tweeted out by the European Tour towards the end of 2016 in which the subtitle misquote can be seen at the 3:00 mark.

In this week’s #SeasonPass:

Li responded at the time to the misquote with some laughing emjois.

Probably can get some girls???? https://t.co/mEoSNrKO5k

Another epic Phireside with Phil in the books.