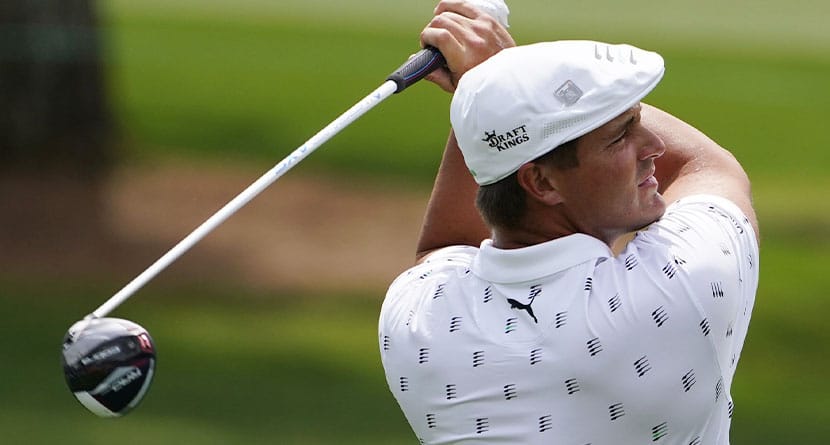 The PGA Tour’s Return To Golf in 2020 amid the global pandemic brought the best players in the world to Tour stops that hadn’t been accustomed to having that level of star power in years.

One such stop was the RBC Heritage at Harbour Town Golf Links on Hilton Head Island. The third event back on the schedule, many of the game’s top players opted to play three events in a row to restart their season — something that was great for the tournament and golf fans watching from home, but not so much for those volunteers and homeowners who were working and living beyond the course’s confined driving range.

The range at Harbour Town is small by Tour standards, so much so that players were bombing drives up and over the 130-foot tall net. Most notably among them was Bryson DeChambeau who was just in the infancy of his “gaining mass” stage.

Insane speed from @b_dechambeau Launching bombs and having to move to the very back of the range or it’d be in someone’s kitchen 360 yards away. Unbelievably impressive to witness 🔥🔥💣💣💣🙌🏾 pic.twitter.com/LPLdHrPsHR

Beyond the driving range net is a fairly busy road within the Sea Pines Plantation, abutted by the 8th green, some homes and a volunteer hospitality tent. With big hitters like DeChambeau, Rory McIlroy, Justin Thomas, Dustin Johnson and others in the field, the net couldn’t contain their distance, making the road, homes, tent and greens beyond the range fairly dangerous.

Adding to the issues was the tournament’s adjusted date in June, which Jonathan Wright, golf course superintendent at Harbour Town, brought a different wind and more heat, a recipe for balls leaving the ball park.

Putting their heads together, Wright and his team sprung into action for this week’s event well in advance with news that DeChambeau would be returning for another bout with the net. What they came up with is admittedly a little makeshift, but with more spectators on the ground, it was a necessary endeavor.

Not sure if they could raise the netting of the range under local ordinances, Wright and his team decided to extend the net temporarily.

(Here’s a view of the new driving range net from the vantage point of No. 8 fairway)

Working the Heritage this week and they paid thousands for these cranes to hold up this net so Bryson doesn’t hit it over the range on to #8 green… Bryson withdrew today 😂😂 pic.twitter.com/PIbQimyu3U

With Wright manning a walkie-talkie from the hitting area of the range, a pair of maintenance workers manned some rented boom lifts holding two nets attached in the center by carabiners. The process turned out to be more arduous than they believed needing to maneuver around guide wires and overhanging tree branches.

“It was the most stressful part of our week,” said Wright. “It was a bit of a process, man.”

But as the saying goes, “the best laid plans of mice and men can still go wrong.”

After a disappointing finish at the Masters, DeChambeau opted to withdraw from the event at Harbour Town, and according to GolfDigest.com’s Shane Ryan, reports from the ground at Harbour Town say that players are still clearing the newly added net.