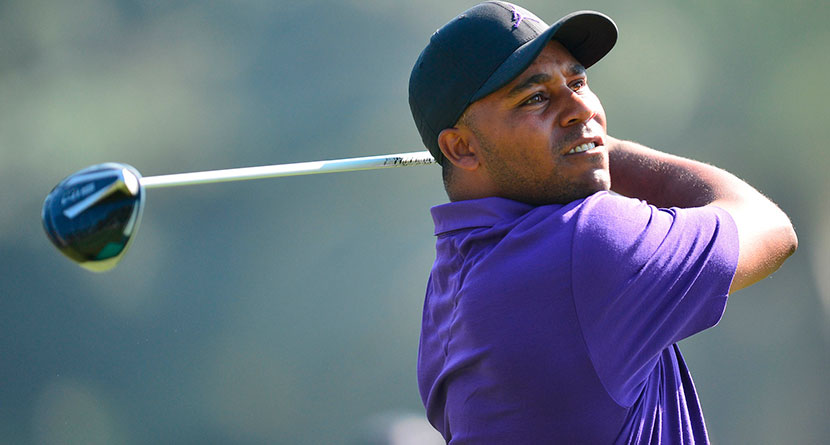 Professional golfers aren’t immune to the odd bad swing, even those who are leading one of the biggest tournaments of the year.

Harold Varner III was co-leading The Genesis Invitational on Sunday heading to the back nine at Riviera Country Club when the inevitable happened.

Varner was hitting a 3-wood off the iconic short par-4 10th tee when he hit a few inches behind the ball, causing the ball to only travel 128 yards down the fairway.

On many other short par-4s, a 176-yard approach shot wouldn’t be the end of the world, but the diabolic 10th hole left Varner III without a viable option for his second shot.

“I missed the ball – completely missed it,” Varner III told GolfChannel.com’s Ryan Lavner in the locker room after the round. “Just sucks, man. You’re f*cked pretty much. Terrible timing, huh?”

The most sought after footage since the Zapruder film apparently. Here’s the elusive Harold Varner topped 3 wood. No toptracer included. @NoLayingUp @BrendanPorath pic.twitter.com/cJF782CcZi

Varner III hit his second shot long and left of the hole, again leaving himself next-to-nothing, which resulted in a third shot that scuttled past the pin and into a greenside bunker. He hit his fourth shot to 12 feet and missed the putt for bogey, which dropped him out of the lead.

He would compound his double on 10 by making bogey on two of his next four holes to essentially eliminate himself from contention.

“Doubles shouldn’t stop you from playing good golf the rest of the way,” he said. “It just sucks how I doubled it.”

Varner III admitted it wasn’t the first time he’s hit that shot under the gun. Earlier this season, playing alongside England’s Tyrrell Hatton at the CJ Cup, Varner said he did the exact same thing.

“I’m gonna call Tyrrell and say that I did it again. He’s gonna laugh his ass off.”

Varner III ended up finishing in a tie for 13th place.