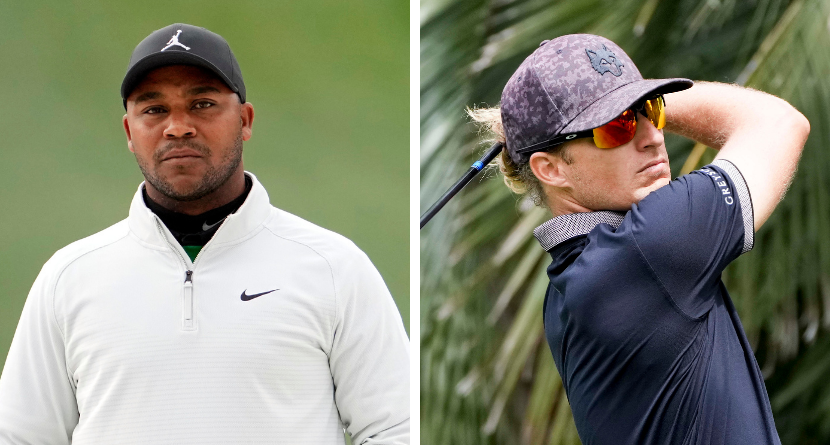 Golf fans could use an uplifting story, what with Phil Mickelson’s exile and the incessant noise from Greg Norman’s splinter tour overshadowing the magic and the majesty of Masters week.

And so it seemed we were finally getting a welcome reprieve from all the negativity when Morgan Hoffmann, a 32-year-old pro who hadn’t teed it up in almost a thousand days, returned to action at the RBC Heritage with renewed purpose and dreams of realizing his vast potential.

Alas, Hoffmann missed the cut by a single stroke. But his comeback after years of battling muscular dystrophy — however unconventional his treatment method — was nonetheless a feel-good story of the highest order. At least outside the ropes.

22-footer to get into red numbers to start the day for @Morgan_Hoffmann 💪 pic.twitter.com/dWdrg5NeqH

Asked after Thursday’s round if he noticed any changes in Hoffmann’s game, his playing partner Harold Varner III raised eyebrows with his blunt answer.

“I did not, but I’m not a very aware person, never have been,” Varner said. “I’m out there to beat Morgan. I don’t really care. … I get that he’s been through a lot, but everyone on this planet’s going to go through something, and that’s his battle. My battle may come down the road later.

“When you’re on the golf course, it’s time to compete. I want to win. I don’t know. That’s kind of messed up, but it is what it is.”

Just so everyone has proper context of what Harold Varner III said re: Morgan Hoffmann’s return, here are HV3’s full answers pic.twitter.com/sKZXoP7Hfs

A former top amateur and a collegiate star at Oklahoma State, Hoffmann had his best finish on Tour when he tied for second at the 2017 Honda Classic. It was that same year when he revealed his condition in a Players Tribune post before taking an extended leave from the Tour.

Hoffmann was diagnosed with facioscapulohumeral muscular dystrophy in 2016 and moved to Costa Rica with his wife, Chelsea, three years later when traditional Western medicine wasn’t improving his condition. His spiritual journey to a healthier outlook was rendered beautifully in a Golf Digest profile by Daniel Rapaport published in February.

For his part, Varner III wound up finishing in a seven-way tie for third at 12-under-par — so perhaps he was right to try to maintain a competitive edge.