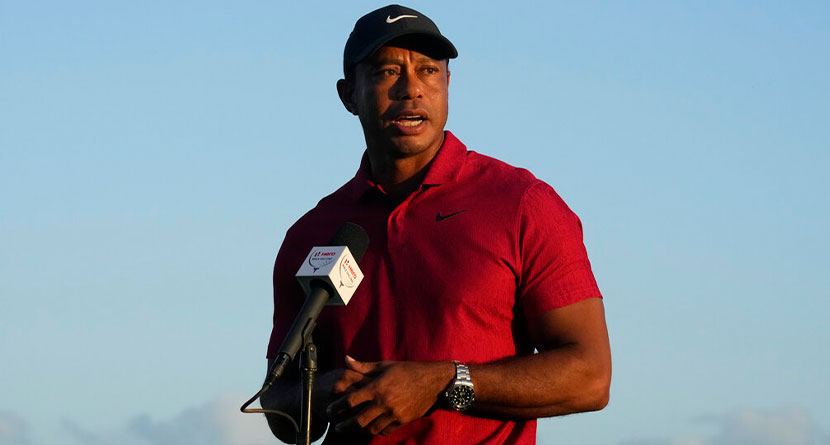 ORLANDO, Fla. (AP) — Twenty years have passed since Padraig Harrington first faced Tiger Woods on the weekend at a major, and the Irishman has kept a close watch ever since.

He doesn’t think Woods is finished. Harrington believes Woods can win another major if he can just get to the final nine holes.


“You’d never run Tiger off,” Harrington said, drawing from the two hours he watched Woods play in a 10-hole made-for-TV exhibition last weekend. “But I actually think he might be … in a better place than I had thought.”

Never mind that the 15-time major champion turns 47 at the end of the month, or that Woods has had as many — if not more — surgeries than he has won majors.

Plantar fasciitis in his right foot kept Woods from playing the Hero World Challenge in the Bahamas two weeks ago, and he wouldn’t be playing with his 13-year-old son in the PNC Championship this weekend if not for carts being allowed.

“So I would never doubt.”

“Watching him in The Match, he was in a better place than I thought…Looking at him, I think he’ll win another major.” pic.twitter.com/epPLHZaSj5

His views were contrary to Colin Montgomerie saying earlier this week on a podcast he doesn’t think Woods can win again.

“Listen, yes, he’s great,” Montgomerie said. “But Tiger doesn’t have to now just get back to the standard he was performing at then. He has to improve it. The standard is improving all the time, and there’s not one or two guys that can beat him now. There’s 22 guys that can beat him. So, it’s Tiger trying to get not back to where he was but to get to a standard he’s never been at before and I don’t think that’s possible.

“I can’t see that happening. I’d love it to happen because it’s great for the game. I would love him to win. But I just can’t see it happening.”

Woods has played all of 172 holes this year in tournaments — 162 while walking. He tied for 48th in the Masters, withdrew after the third round of the PGA Championship on a cold day at Southern Hills and he missed the cut at St. Andrews. He was in a cart for the team match last Saturday with Rory McIlroy as his partner.

Woods said in the Bahamas that “I don’t have much left in this leg,” referring to the right leg that was shattered in a February 2021 car crash in Los Angeles.

Harrington and Woods first squared off in the third round of the U.S. Open at Bethpage Black in 2002 — Woods won his second straight major — and they have been friends since then, with Woods having respect for the Irishman’s work ethic.

Harrington used to say his goal was to see where he stood through 63 holes, and then show what he has on the final nine. He won three majors in 2007 and 2008.

What inspired him from watching 10 holes in the match last week was the speed Woods showed in his swing, which he thought was enough power to keep up with today’s generation and to at least get him to the back nine.

“The little bit of extra speed will help him because in the first 63 holes … you know, who would want to be coming down the stretch against Tiger?” Harrington said. “You know he’s capable of doing anything at that stage. I think he’s in a better position to get himself into that last nine holes.”

It only takes 27 holes to get to the last nine at the PNC Championship, which Woods is playing for the third time. Woods and Charlie, now 13, finished one shot behind John Daly and his son a year ago.

The competition can be serious at the Ritz-Carlton Golf Club Orlando, though this is mostly about time spent among fathers, mothers, sons and daughters.

With Woods involved, everything always feels bigger, however much time he has left.

“I would say we are never really going to know how much is in there because he just continues to do more than we thought he would ever be able to do,” Stewart Cink said. “He continues to defy really all conceivability.”