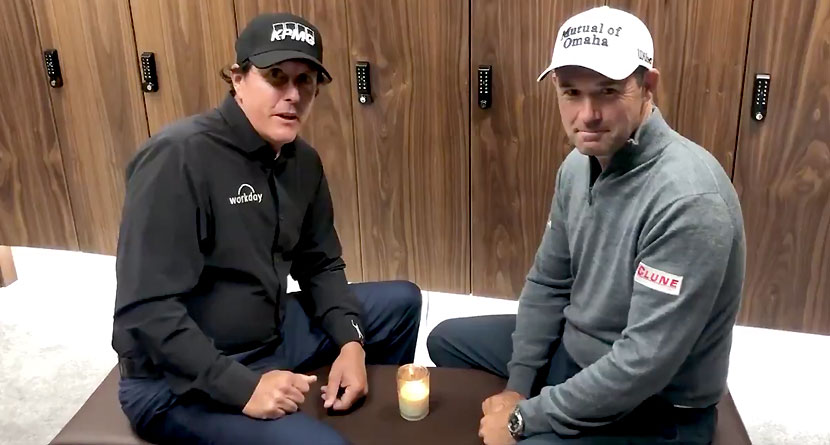 Make what you will of the fact that Phil Mickelson’s “hard reset” and break from “Phireside” chats lasted only two weeks, and included an uninspiring performance at the Open Championship, which saw him miss the cut by seven strokes.

However, for those of us who crave classic Mickelson stories, we were privy to a pair of them over the weekend at Royal Portrush.


Naturally, Mickelson set the scene in the Champion’s Locker Room at Royal Portrush and knocked out a pair of chats with former Champion Golfers of the Year Zach Johnson and Padraig Harrington.

On the eve of the Open Championship, Johnson joined Mickelson to tell the story of a Champions Dinner from Augusta National in 2014 when Adam Scott selected the menu as a result of his 2013 victory. Scott served a meringue-based dessert called a Pavlova. No one knew the origin or reason for the name, except for Mickelson, of course.

The first guest I could persuade to join me (other than my mom) is past Champion Golfer of the Year and Masters Champion @ZachJohnsonPGA. So cool of him to join me in The Open Champions locker room. He is a special person and player. pic.twitter.com/PzkK2rowT7

Seemingly minutes or days later, Mickelson filmed another Phireside with Phil that he posted to his social media channels on Tuesday after the Open that featured two-time Champion Golfer of the Year, Padraig Harrington.

Harrington shared a story from early in the 40-somethings’ playing days that helped to bolster Mickelson’s reputation as one of the most generous people in golf.

As the story goes, Phil and Harrington were playing the Singapore Open and the two made a side wager on who would finish better in the event. Mickelson won the bet and chose “the best steakhouse in Singapore” to take a few friends, Harrington, his caddie out to dinner, all on Harrington’s dime.

Everyone wants to beat me and it’s great when you do. @padraig_h will share what happens if you don’t. #PhiresideWithPhil pic.twitter.com/3iX5kKSbjp

Lo and behold, Harrington was stuck with a five-figure check — “Oh, well,” Mickelson said — and in the process, earned Phil a fan for life.