Hatton Launches Club In Fit Of Anger At Scottish Open 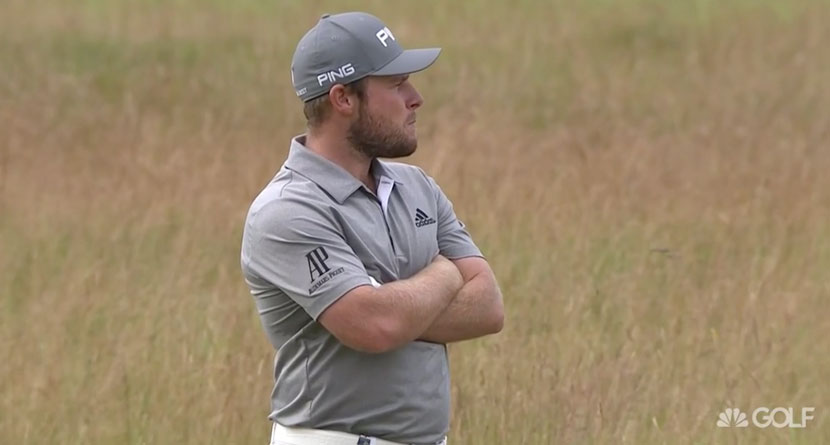 English Tour pro Tyrrell Hatton is a heart-on-his-sleeve kind of golfer, and this past weekend at the Aberdeen Standard Investments Scottish Open an errant approach shot was enough for Hatton to blow his top.

Playing his second at the par-4 10th hole at the Renaissance Club, Hatton needed to manufacture a hook around a tree that was blocking his path to the green.

When his ball struck the tree, Hatton instinctively and violently whipped the club backwards toward the 11th fairway.

“Just inside of 130 (yards) and he had to hook it around a tree,” NBC / Golf Channel’s Jim “Bones” Mackay commentated. “Oh my gosh, he hit the tree and then threw his club.”

“Actually, the throw was a better swing,” David Feherty piped in.

“Well as you said earlier, David, he speaks certain languages fluently, including I’m disgusted,” Mackay continued. “He will let you know what he’s thinking.”

Hatton would be able to save par on the 10th and shoot a second-round score of 5-under par 67 to make it to the weekend. He shot weekend rounds of 64-67 to move up into a tie for 14th heading into this week’s Open Championship at Royal Portrush.

Hatton will play the first two rounds of the year’s final major alongside American Keith Mitchell and Belgian Thomas Pieters. They will tee off on Thursday at 12:42 p.m. local time, which is 7:42 a.m. ET.