Hatton “Raging” After Official Let Mickelson Off The Hook 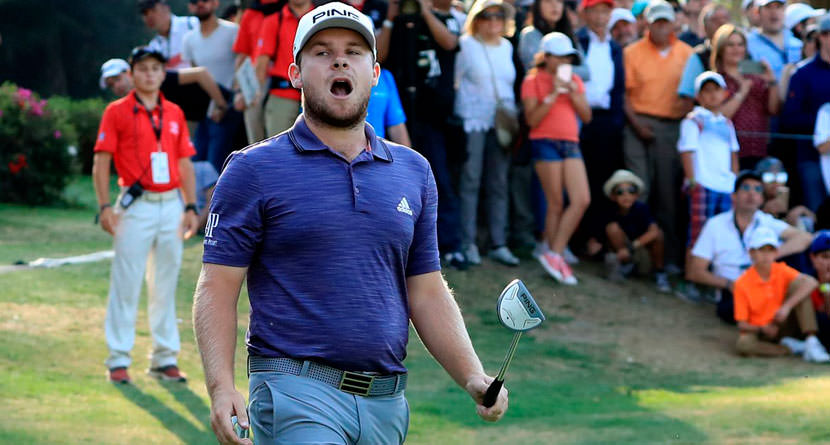 Tyrrell Hatton was “raging” mad during his showdown with Phil Mickelson, Justin Thomas and Shubhankar Sharma down the stretch at this month’s WGC-Mexico Championship because of something a rules official did.

Speaking with Sky Sports Golf Podcast this week and transcribed by Bunkered Magazine, Hatton laid out the entire situation as it unfolded down the final few holes at Club de Golf Chapultepec.

Tyrrell Hatton used this week’s @SkySportsGolf podcast to hit out a rules official over a peculiar incident involving Phil Mickelson at the WGC-Mexico Championship.https://t.co/3cfDDPgB8Y

“Sharma wasn’t that slow, to be honest. He was fine. But I feel like Phil was taking quite a lot of time on certain things. We’d had a warning earlier on in the round to speed up and we kind of did but not massively,” Hatton said. “I’d just birdied 14 to tie with Phil and, you know, you’ve got four holes to go and it’s kind of crunch time. We had all hit good tee shots up 15 when one of the officials charged over and said, ‘Phil, you’re exempt but Tyrrell and Sharma, I’m going to start timing you.’

“Phil goes, ‘Oh, he obviously likes me’. I was raging.

“Danny, my manager, was following us. I walked over to him as I got nearer the ball and I said, ‘Can you believe what this referee’s just done? He’s said that me and Sharma are on the clock.’

“In the circumstances, it was a disgrace. I had just tied with Phil. Do you know what I mean? It’s a big part in the tournament. I was raging. I was so angry.”

Hatton’s antics drew the ire of some of the broadcasters and fans down the stretch, but he was able to eagle the 15th hole to stay in the hunt. Another episode with the official on 16th hole sent him over the edge.

“I could see him looking at his stopwatch,” Hatton said. “I ended up hitting my first putt ten or 12 feet past the hole. I got it wrong. It was a misread, but I was rushing because I didn’t want to get a bad time. Luckily, I knocked the par putt in. It was quite frustrating. It was the first time I’d been in a situation [to win] at a WGC. I found it slightly off-putting and it’s frustrating that happened.

“I’ve since spoken to a few players about it and they couldn’t believe that the referee did that.”

Hatton would go on to miss out on the two-man playoff between Thomas and Mickelson — eventually won by Phil — after bogeying the 72nd hole.