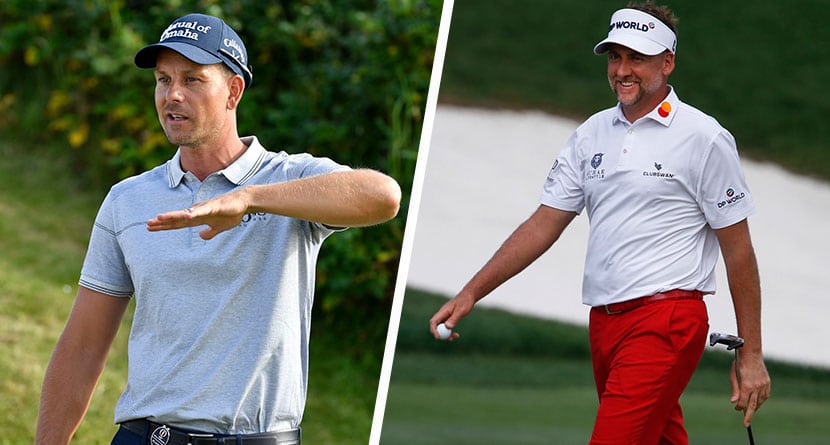 Despite his frosty and stoic outward appearance, Henrik Stenson has long been considered one of the funniest guys in professional golf.

Once you get past the wraparound sunglasses, Stenson’s veneer immediately begins to soften. Get him in front of a microphone, and the sarcastic wit shines through.

While the 2016 Open Champion didn’t have a fantastic year inside the ropes, he was still able to amuse himself —and his more-than half-million followers on social media — by poking the bear also known as Ian Poulter during the final European Tour event of the season, the DP World Tour Championship in Dubai.

With both 40-plus-year-olds teeing off a few hours ahead of the leaders, Stenson’s prankster senses kicked into high gear. Playing in the group just ahead of Poulter, Stenson was able to secure the car keys to Poulter’s courtesy car, which made for a fun voyeuristic film session for Stenson after the round.

Pranking wars with @IanJamesPoulter continues for the world to see😉😎🤣 pic.twitter.com/yhOyPBWxjm

“He’s looking. We all know the feeling. He’s going to be looking for a while” Stenson commentated Poulter’s search before confirming his intentions to a fellow watcher. “Of course, he’s going to be upset with me, that’s the whole point!”

While Poulter and his caddie, Terry Mundy, searched every pocket of his staff bag, Stenson eventually sent a selfie with Poulter’s keys in his mouth. Upon receipt, Poulter located Stenson and offered a few choice words across the parking lot.

For Poulter’s part, he took the prank in stride, but vowed revenge.

The game continues…when will I get my revenge…!!! Sleep with both eyes open old Swede 👀@henrikstenson pic.twitter.com/Mg12CWkpkk

“The game continues,” Poulter tweeted his version of the prank with his own subtitles. “When will I get my revenge?! Sleep with both eyes open, old Swede.”