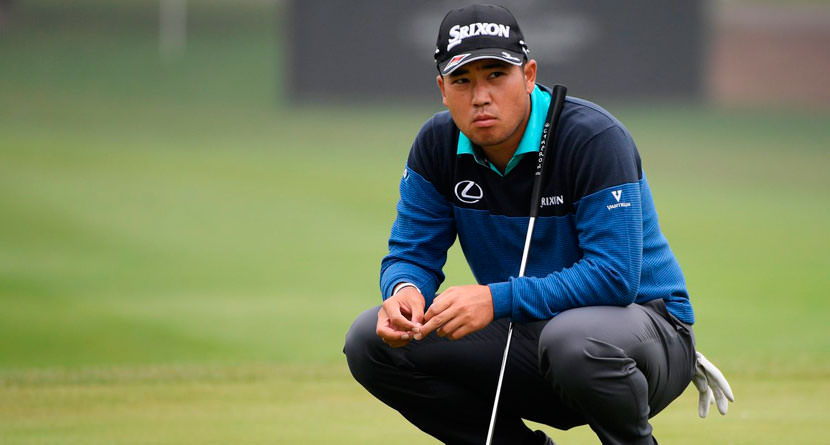 Hideki Matsuyama’s Hero World Challenge title defense nearly took a catastrophic hit on Friday in the Bahamas. Working on a 7-under par round, Matsuyama left his approach at the par-4 18th hole out to the right, which led to a touchy uphill pitch.

Stubbing the shot, the ball failed to climb onto the putting surface and made its way back towards the spot where Matsuyama played the original shot from. Instinctively, according to Matsuyama, he stepped on the small divot he made while hitting the shot, which could have been construed as breaking Rule 1-2.

You can’t do that Hideki. pic.twitter.com/Nu3NUCAbLV

GolfDigest.com’s Brian Wacker had the details on the ruling.

Hideki Matsuyama, the defending champion, was cleared of a possible four-stroke penalty on the 18th hole Friday at the Hero World Challenge, after he tamped down his divot as his ball rolled back toward his feet following a chip shot that came up short of the green on the final hole.

“[He] didn’t have any intent to improve,” said PGA Tour Vice President of Rules and Competition Mark Russell. “He said he was not even really conscious that he did that. His intent was not to improve [the conditions] coming back there and the ball didn’t come to rest in that spot.”

Had the ruling gone against him, Matsuyama would have been penalized two strokes for the infraction and an additional two strokes for signing an incorrect scorecard, similar to how Lexi Thompson was penalized four strokes at the ANA Inspiration earlier this year.

Rule 1-2 states a player must not take an action with the intent to influence the movement of a ball in play or alter physical conditions with the intent of affecting the playing of a hole.

The exception to the rule is if such an action is taken “for the sole purpose of caring for the course.”

Officials reviewed a tape of the incident and Russell spoke with Matsuyama after his round.

No penalty for Hideki Matsuyama for issue at No 18. PGA Tour official said there was “no intent” to improve his lie. pic.twitter.com/IwHYjmUsgc

Added Golf Channel’s Curt Byrum: “All of it comes right down to what the participant tells the official, whether or not he meant to enhance the lie or not. They ask it a sure manner, so it’s what it is. Not intent, only a response apparently by Matsuyama.”

Matsuyama went on to bogey the hole to finish with a six-under 66 that leaves him in a tie for fifth five strokes off the lead of Charley Hoffman. He will be paired with Tiger Woods for Saturday’s third round.