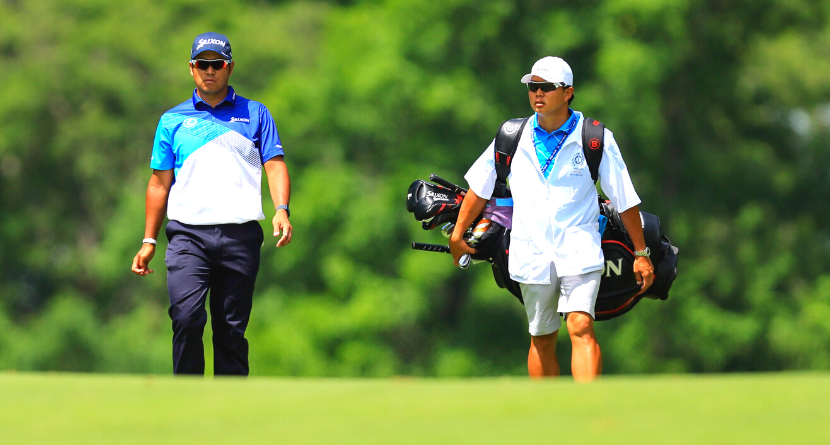 Hideki Matsuyama and his caddie, Shota Hayafuji, slunk off the course in shame — a stark contrast to the iconic visual of Hayafuji bowing in appreciation of Augusta National last spring.

In a stunning development on Thursday at the Memorial, the 2021 Masters champ was assessed the first disqualification of his career for violating rule 4-3(a): deliberately changing club’s performance characteristics during round.

It appears paint on the face of his 3-wood, near the impact area, was the reason for Matsuyama’s DQ. pic.twitter.com/ExuSZKd7YH

Specifically, Matsuyama — who earned his first career victory at the 2014 Memorial — was found to be in possession of a 3-wood with white paint on the sweet spot of the clubface. Crucially, the paint was not in the grooves of the club but rather on the surface, outside the grooves.

Had Matsuyama only possessed a nonconforming club without using it, he could have continued his round without penalty. But once a rules official determined that the club had been used (Matsuyama deployed it on the first tee), the end result was already in motion.

“Our committee became aware through some pictures that were posted that there may be a substance that has been painted on the face of one of Hideki’s clubs,” said Steve Rintoul, the Tour’s chief referee for the event. “Unfortunately, when we found out about it, Hideki was playing the second hole.”

“At that point,” Rintoul continued, “without jumping to too much conclusion with the club and what exactly was done to the club, I met Hideki at the fifth tee. The damage was done. One shot and it’s a disqualification.

“So I said just keep playing. We’ll do our due diligence with this club with the USGA, the equipment standards guys and our committee, to ascertain that we come up with the right result here.”

As the rule states, “a substance or any treatment can’t be applied to the face of a club which could influence the flight of the ball, the spin, the loft or anything on the ball, how the ball performs.”

“The pictures were damning,” Rintoul said. “It’s very much like a whiteout you might use on a paper. A whiteout substance that was very much up on the face of the club which, really, it’s very clear in the equipment rules that’s not allowed.”

Matsuyama was 3-over through his first nine holes before getting the boot. Earlier in his round, he caught an unbelievable break when his ball came to rest on a narrow bridge over a hazard. So perhaps the golf gods were just evening things out.

Saved by the bridge 😅 pic.twitter.com/COEgxvobdZ

As fate would have it, Matsuyama’s absence means Rory McIlroy and Patrick Reed played the remainder of the round as a twosome and will go out as such again on Friday. The two have engaged in some memorable duels over the years, a spirited singles match in the 2016 Ryder Cup at Hazeltine chief among them.