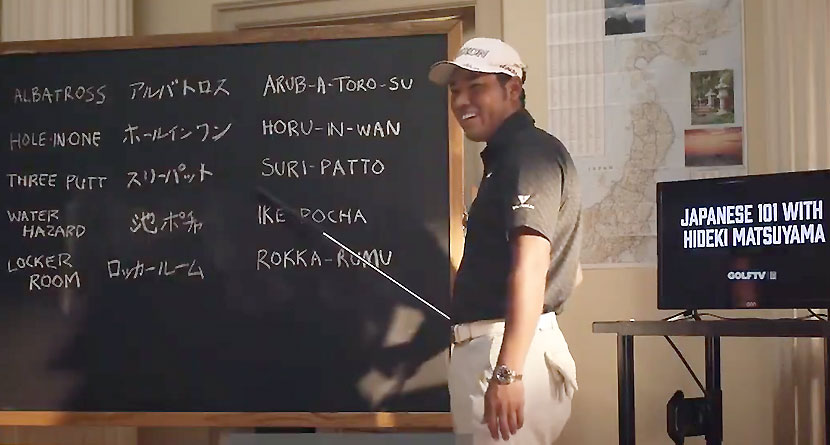 The Challenge: Japan Skins is only two weeks away, and GolfTV is doing their best to promote the revitalized skins game format with some social media marketing that features the four players competing.

While the first two videos — a group text and a “would you rather” Q&A largely featured the three English-speaking participants — Tiger Woods, Rory McIlroy and Jason Day — GolfTV’s most recent offering gave the de facto host, Hideki Matsuyama, lead billing.

Released on Wednesday, “The Japanese Class” showed Woods, McIlroy and Day getting schooled in Matsuyama’s native tongue for the upcoming exhibition that will take place on Oct. 21 at Accordia Golf Narashino Country Club in Chiba, Japan.

What seems like a typical publicity stunt takes a few jabs at the players and allows Matsuyama to use his bilingual knowledge to make his competitors look silly.

Asking how to say a few different phrases that would be used as smack talk, Matsuyama turns it around on his famous friends so they’re saying something quite different than what they think they are.

In the end, Woods and Day are the model students who become fluent very quickly while McIlroy, recently awoken from a mid-day siesta, is left without a clue.

The event, which precedes the PGA Tour’s inaugural Zozo Championship later in the week, will be available to be viewed on GolfTV internationally and on Golf Channel in the United States on Monday, Oct. 21. Coverage begins at 12 a.m. EST.