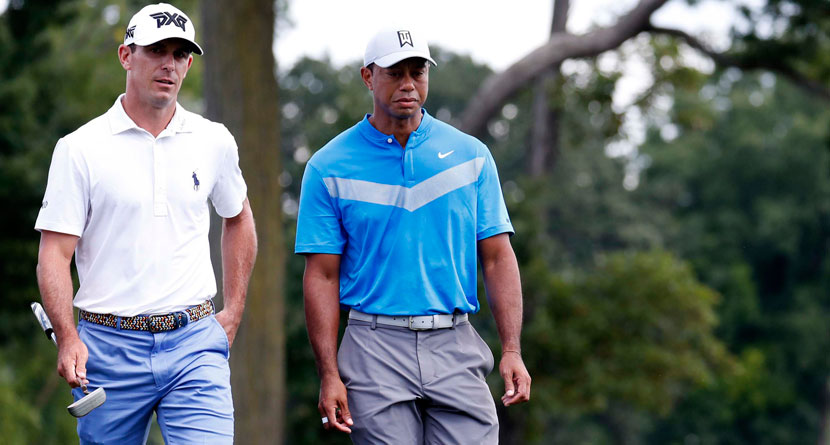 With only 30 players teeing it up at the PGA Tour’s Playoff finale this week at East Lake Golf Club in Atlanta, the vast majority of Tour pros are doing exactly what Billy Horschel is this week: enjoying some time off to decompress from a long season with their family and friends.

The 2014 FedEx Cup champion decided to use some of his time off to reach out to fans and explain his thoughts behind the new changes to the FedEx Cup Playoffs, the staggered-scoring start at the Tour Championship and the one thing he would have changed if it were up to him.


Speaking via his Twitter account, Horschel largely applauded the simplified nature of the revamped FedEx Cup Playoffs, which feature just two events before the Tour Championship, as well as the staggered-scoring start. He did have one suggestion for a change, however: make the disparity in strokes to start the week in Atlanta a little tighter.

Lot of people, as always, complaining about the new Tour Championship format and how to win FedEx Cup. Explanation on why it changed. Also, my 2 cents to the Tour on how I thought we could make it a touch better. Maybe more exciting. pic.twitter.com/qO9Dz750F4

Horschel explained that with the contracted Playoffs, players were playing for fewer spots inside the top-30 during the two weeks prior to the finale as they had in year’s past. As a result, he believes that players who earned their way into the field this week should be given a better shot to win than starting 7, 8, 9 or even 10 shots back of the front-runner Justin Thomas.

After posting the video, Horschel offered a few more thoughts via social media, which included an opinion for those who believed Tiger Woods and Shane Lowry deserved to be at East Lake by virtue of their major-winning seasons.

Ppl would love for Tiger and Shane to be at Tour Champ but as the old saying goes, play better. Goes for everyone else who didn’t make it there. Me included. Also, I think Shane and Tiger are doing just fine knowing that they won a Major this year.

“People would love for Tiger and Shane (Lowry) to be at (the) Tour Championship, but as the old saying goes, ‘play better,'” Horschel wrote. “(That) goes for everyone else who didn’t make it there, (myself) included. Also, I think Shane and Tiger are doing just fine knowing that they won a major this year.”

Horschel and Woods are friendly, and the blunt observation definitely wasn’t a shot at Woods as it would also reflect directly upon Horschel who finished the season in 43rd place in the standings.

More accurately, perhaps, would’ve been if Horschel suggested Woods “play more” instead of better, but given Woods’ body post-back fusion surgery, some years just aren’t in the cards for the 43-year-old 15-time major champion.

And Horschel’s right about another thing, Woods and Lowry are both more than happy with their seasons considering each has a new piece of major hardware to put in their respective trophy rooms.