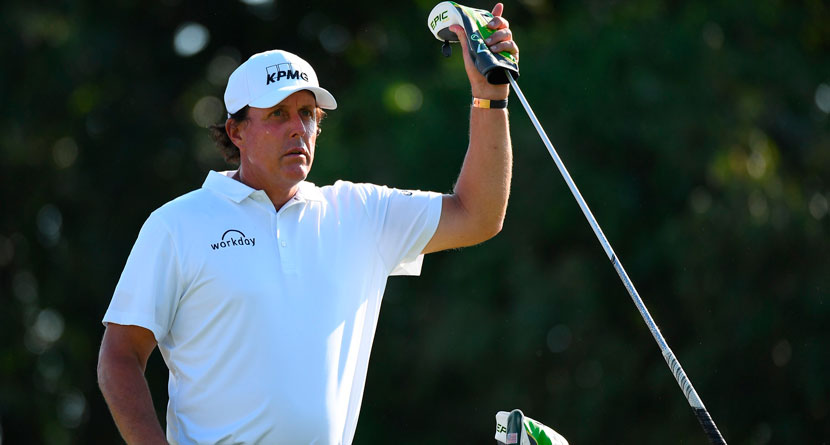 Phil Mickelson’s social media series “Phireside with Phil” became a little too real on Sunday at the BMW Championship.

With inclement weather expected in the area, the PGA Tour announced on Saturday night that pairings would be consolidated into threesomes going off both tees on Sunday morning.

The weather warnings proved to be true with storms passing through the Chicagoland area early on Sunday morning, wreaking havoc on one hotel close to Medinah where many players and tournament officials were staying for the week, including Phil Mickelson.

While reports of a lightning strike causing a fire at the hotel started to circulate on social media, Mickelson confirmed them with a tweet of his own.

How’s this for crazy? My hotel was struck by lighting, I was on top floor,we were evacuated and the place is on fire(only thing of mine on fire this week.) I can’t get back into my room and may miss my tee time because I am without clubs and clothes.

With the hotel evacuated, Mickelson wondered publicly if he’d be able to make his tee time at 11:52 a.m. EST. After leaving the scene, Mickelson was able to get back into the hotel and arrive at the course about 30 minutes before his tee time.

Phil Mickelson is at Medinah. Pulled in at 10:15 local. Arrived in flip flops and put his spikes on in the parking lot. Took a couple swings with a training aid and went to the range. He’s off 10 tee in 30 minutes. pic.twitter.com/H3WP2tKHz7

After shooting a 1-under par 71 that left him in a tie for 48th and well outside the top-30 number required to earn entry into East Lake for next week’s Tour Championship, Mickelson met with the media and gave some more context to his bizarre morning.

“Kind of a funny deal,” Mickelson said after signing his card. “The building got struck by lightning right above me and blew out a brick chimney and caught fire a little bit. There were ten fire trucks. I got in my car and left and couldn’t get back. The roads were closed and the hotel was closed.

“I was just thinking I’ll be in San Diego a little earlier than I expected. It all worked out. It was fine.”

For Mickelson, it was a fitting way to cap an unusual year that saw him win for the 44th time on Tour at AT&T Pebble Beach Pro-Am in February, but do little else over the summer months. He made the cut in three of the four major championships, but couldn’t muster any better than a T24 finish at The Open.

At 49 years old, Mickelson isn’t questioning his golfing mortality just yet, but he did say he needs some time to decompress and regoup.

“I need a break,” he said. “I’ve had a rough four, five months. Probably the worst four, five months stretch of my career. I’m looking forward to having a couple months off and kind of regrouping and come back fresh. I’ve seen some very positive glimpses with areas of my game I’m trying to work on. Mentally I haven’t been sharp and been there.

“I played very horrible golf. I’m looking forward to getting back in it, but I need a break.”