How Augusta National Got So Green So Quickly 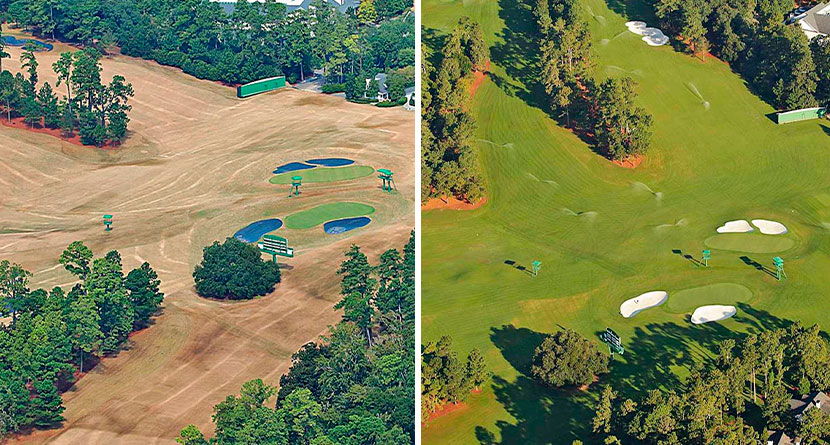 A Masters unlike any other is less than a week away, and with this year’s extenuating circumstances having forced Augusta National to “green up” in early November, there were some interesting agronomical tricks of the trade taking place in recent weeks at ANGC.

Flyovers from Eureka Earth pilot David Dobbins only a few weeks ago showed Augusta National browned out, bunkers empty with nothing looking remotely Masters-y with the exception of a few putting surfaces.

Then, as if by magic, a few days later, the exact same aerial shot — of Augusta National’s 9th and 18th greens and surrounding areas — looked to be primed and ready for the best golfers in the world.

How did that happen?

Lane Singleton, the vice president of agronomy at Reynolds Lake Oconee, a golf resort about an hour west of Augusta told Golf.com that it’s not as magical and mysterious as it may seem. In fact, it’s a pretty common occurrence for golf clubs throughout the South, except Augusta National took this practice a little further because of course they did.

Augusta National looks a bit different than it did 10 days ago! @EurekaEarthPlus providing the best golf content right now. pic.twitter.com/gk9dmYY86r

According to Singleton, the process is one you’ve likely heard of in the golf lexicon even if you don’t totally understand what it means: overseeding.

Augusta National’s predominant strain of grass is Bermuda, and in the fall, Bermuda grass goes dormant and turns a brownish color. When courses which feature Bermuda go dormant, a common greenskeeping practice is to overseed the Bermuda grass with ryegrass, which makes for better playing conditions as well as a more stunning visual.

While the process of overseeding is relatively simple, before Augusta National spreads the ryegrass seeds, they used another step: scalping, or cutting the dormant Bermuda grass down to almost nothing in an effort to allow the ryegrass overseed to take hold better.

“It opens up the turf and gives those ryegrass seeds a better chance to settle in,” Singleton said.

For courses that are open year-round, the process of scalping isn’t done to the extent that Augusta National is able to given the club’s summer closure and unlimited resources, which is what made ANGC’s transformation so remarkable and quick.

The next step in the process is the water the seeds and sprouts with water. A lot of water.

As you can see in the photos above, the sprinklers were up and running, allowing the sprouts to flesh themselves out and turn into the remarkable lush, green landscape we’ve come to know and expect at a Masters Tournament.

Maybe it’s not as magical as you may have thought by simply looking at the before and after pictures, but there’s no where like Augusta National who can seemingly bend Mother Nature to their will.