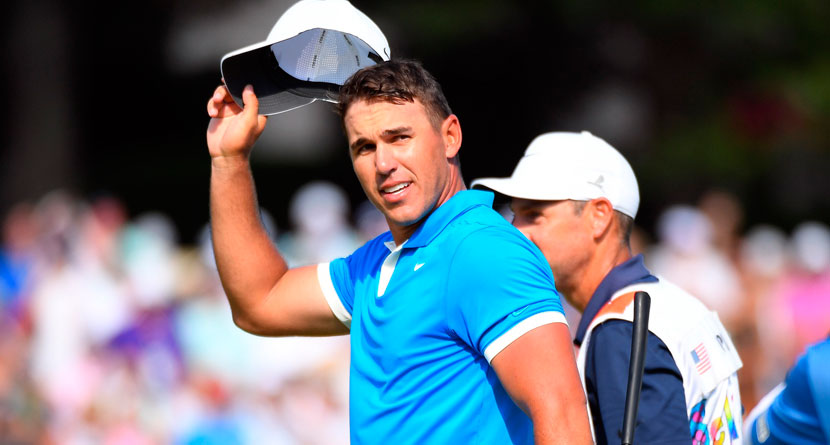 Brooks Koepka has plenty to smile about these days. The four-time major champion picked up his third non-major victory on the PGA Tour on Sunday at the WGC-FedEx St. Jude Invitational, but the cash windfall the victory brought with it was perhaps more impressive than his three-shot victory.

For the victory in Memphis, Koepka earned a tidy little $1.75 million paycheck, but that was only the tip of the iceberg. His win also earned him 550 FedEx Cup points, which with only one event left in the regular season — this week’s Wyndham Championship, worth 500 FedEx Cup points to the winner — solidified his spot atop the regular-season standings.

As a result, the Tour’s new regular season payout structure — called the Wyndham Rewards, which gives the top-10 players in the FedEx Cup standings at the end of the season a bonus — was wrapped up a week ahead of time by Koepka. For that accomplishment, Koepka earned an additional $2 million.

Jack Nicklaus won 5.7 million on the PGA Tour. For his entire career! Jack won 73 times including 18 majors.
Brooks Koepka won 4.75 million TODAY with purse, Wyndham & Aon bonuses. ?
Jack won most of his events in the 70’s.
Apparently the 1870’s.

Last, and technically least, Kopeka earned the $1 million Aon Risk-Reward Challenge, a competition that uses a scoring system to reward aggressive and well-executed play through the course of the year. Koepka posted a -1.000 average score to par on the holes that were selected for the competition, which tied him with Jason Day.

The tiebreaker went to Koepka, however, because he posted a better average score to par in events that he and Day both played in.

“I’m sure I can find a way to spend it,” Koepka said. “It’s incredible to look at what I’ve done this year. Just shows consistency, trying to take my game to a new level, and I’ve done that.”

Koepka gets to enjoy a week off this coming week as he preps for the FedEx Cup Playoffs over the course of the last three weeks of August.

“The year’s not done,” Koepka said. “I still got a few more things to finish off and hopefully it will go my way.”

What a year it’s been — and could continue to be — for Koepka.