WATCH: Ian Poulter Snap-Hooks First Tee Shot At The Open After Getting Booed 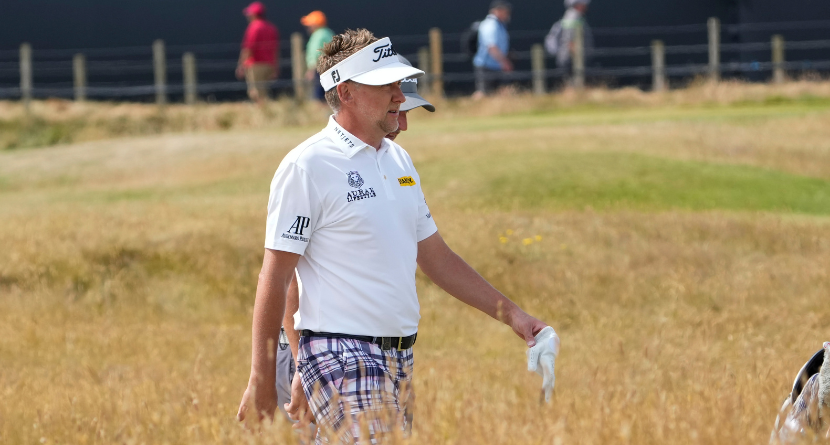 Ian Poulter is not an especially popular player in the States, and the reason is no secret. For the better part of two decades, he’s been the European Ryder Cup squad’s resident pest and provocateur, punctuating clutch putts with chest thumps and wild-eyed mugging. No one in the history of the event has thrived more in the role of villain.

But over in the British Isles, during the 150th edition of the Open Championship? Surely the 46-year-old Englishman would be greeted warmly by the Old Course galleries under that scenario.

Of course, that was before Poults fled the DP World Tour for the much, much greener pastures of the LIV Golf Series, likely squandering his chance at ever captaining the Euros in the process. And the fans packed around the first tee Thursday responded in kind, heartily booing Poulter when his name was called.

“I’ve never heard him being booed before, I wonder what he’s done wrong,” said former Ryder Cup captain Sam Torrance, who was calling the action on the global feed.

Apparently unnerved by the crowd’s jeers, the 12-time Euro tour winner proceeded to uncork a vicious snap-hook with an iron.

“Didn’t hear [anyone booing],” Poulter insisted after his round. “I actually thought I had a great reception on the first tee, to be honest. All I heard was clapping.

“I thought there was a couple of thousand [spectators] on the tee. So they obviously drowned out the one.”

Negative reactions to LIV players hoping to blend in at majors have been the subject of speculation for weeks, but this is really the first documented instance of boo birds.

You can watch the sequence below:

Boos on the 1st tee at #TheOpen for Ian Poulter. @4golfonline – “ I wonder what he’s done wrong’? pic.twitter.com/1NYYiE0r59

Poulter sufficiently recovered from the nasty reception to bury a 160-foot eagle try that’s thought to be the longest made putt ever captured by TV cameras.

Poulter recorded a 3-under 69, which was tied for the second-best score among the LIV contingent behind Lee Westwood, Talor Gooch and Dustin Johnson.