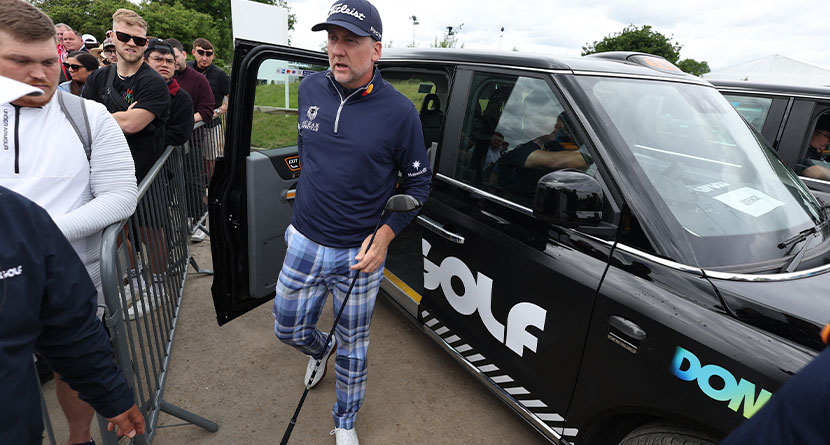 The first legal domino in the battle between LIV Golf and the more established Tours fell on Monday as a judge appointed by Sport Resolutions, a U.K.-based, non-profit global arbitrator, granted stays for Ian Poulter, Adrian Otaegui and Justin Harding that will allow them to play the Scottish Open.

The three LIV Golf players filed an emergency injunction after an appeal letter sent to the DP World Tour by the “Saudi 16” — as they have been dubbed by those in Wentworth headquarters — went unresponded to.

In the letter, the 16 LIV golfers requested a reprieve from the sanctions handed down by DP World Tour chief executive Keith Pelley in which players were fined £100,000 and barred from playing the Scottish Open, the Barbasol Championship and the Barracuda Championship – the three events that are co-sanctioned by the PGA Tour.

“I feel disappointed, I feel offended, that I’m suspended from playing on a Tour I’ve been a member of for nearly a quarter of a century,” Poulter told The Telegraph ahead of being awarded a stay by the judge on Monday. “My commitment to my European Tour card was always to continue and play more events.”

Three LIV players — Ian Poulter, Adrian Otaegui and Justin Harding — will be allowed to compete in the Genesis Scottish Open after a judge stayed their suspensions.
The first of many lawsuits.

In the aftermath, Pelley released a statement saying the Tour was “disappointed by the outcome” of the hearing, but would “abide by the decision.”

“It is important to remember, however, this is only a stay of the sanctions imposed, pending the hearing of the players’ appeal as to whether those sanctions were appropriate,” Pelley said.

As a result of the ruling, the Scottish Open field is being expanded beyond its normal 156-player cap to accommodate the three players who received a stay. Interestingly, a fourth player who had entered the field previously, but no longer is on the tee sheet is Patrick Reed.

Reed resigned his PGA Tour playing privileges ahead of last week’s LIV Golf Portland event, but had hoped to compete on the DP World Tour due to lifetime member status. However, his name had been “withdrawn” from the field list on Sunday.

The Scottish Open begins on Thursday, July 7 and features 14 of the top-15 players in the Official World Golf Rankings.